Covid – New Zealand has similar levels of freedom to Sweden

In Auckland it feels like we have dodged a bullet.  The numbers of new non returning infections continues to trend downwards although regrettably there have been two recent deaths.

Fingers crossed we may again have the virus under control.  Reassuringly the new contact tracing system appears to be working.  It appears all infections can be tracked to the Coolstore or the Mt Roskill Evangelical Church. There has been a lot of testing but new community cases, of which there were two yesterday, have all been within the one cluster.  The new case yesterday was a person in quarantine as a close contact.  As I finish post it has been announced there are four new community cases today, all related to the Mt Roskill Evangelical Church.

Elsewhere in the world things are not so rosy.   I follow Nicola Sturgeon, Scottish leader, on twitter.  This week she sent out a series of tweets explaining why there were further restrictions on gatherings in parts of Scotland.

1. New restrictions have come into effect in Glasgow City, West Dunbartonshire & East Renfrewshire. I know residents in these areas – I am one – feel frustrated and are wondering why we have done X and not Y…so I thought it would be helpful to set out some of the rationale…

She reminds me of a slightly older much more Scottish version of Jacinda Ardern.  During some really strange times in the United Kingdom she has been a beacon of solid progressive leadership.  She follows scientific advice.  And she has that habit of speaking very simply but very clearly on issues.

It made me wonder about Scotland’s Covid response.  They get lumped in with the United Kingdom so a comparison is more difficult.  But I was able to dig out some data.

Elsewhere throughout the world Israel was held up to be another country performing well.  But a recent disappearance of political will to deal with the virus has caused a surge to occur. And Sweden continues to struggle the assertions of Simon Thornley and others to the contrary.

The proponents of the Swedish approach are still active.  From the Herald:

Sweden, whose Covid-19 death rate soared above its locked-down Scandinavian neighbours at the peak of the pandemic, now has a case rate lower than those of Denmark and Norway for the first time since March.

According to numbers submitted to the European Centre for Disease Prevention and Contol, Sweden registered an average of 12 new cases per million people over the past week, compared with 18 for Denmark and 14 for Norway.

The number of deaths is currently averaging at two to three per day, down from the peak of more than a hundred a day it suffered in mid-April.

Stockholm, the centre of Sweden’s pandemic in April and May, registered the lowest number of new cases since March last week.

There are a couple of matters that need to be taken into account.  Firstly Sweden has been scrubbing its figures lately.  It also tests less than other countries.  And this table suggests that its level of lockdown is now comparable to that of Finland, Norway and Denmark, not to mention New Zealand.  The Swedish solution may be nothing more than increasing response measures to that which other more successful countries have been doing for a while.  Claims that Sweden is freer would appear to be misplaced.  With New Zealand recently coming back from level 3 the stringency requirements are very similar. 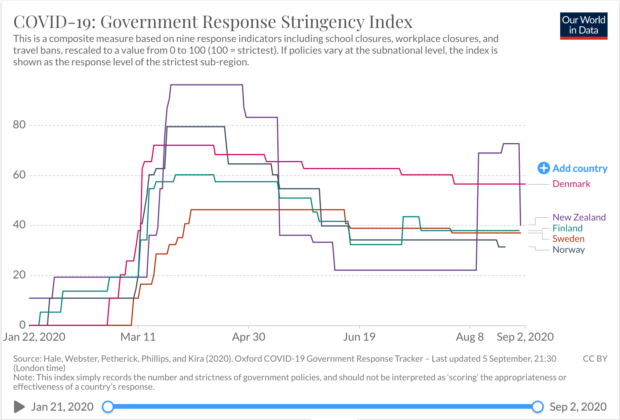 Simon Thornley in particular has been active recently and has made some extraordinary recent claims.  Like:

The Government’s objective of eliminating Covid19 is at an end, due to advice from the WHO, challenges of the Auckland lockdown, and plummeting cases and deaths internationally.

It is not, there is no such advice from WHO and cases and deaths continue to increase.  In fact on September 4 there were 304,626 notified new infections, which was a new record.  The number of daily deaths has stabilised but this is nothing to cheer about.

He also claimed this:

WHO special envoy on Coronavirus said on radio that while New Zealand had done well, it should now follow Sweden’s model.

Scientist Michelle Dickinson said on radio that “we’re going with a different strategy now – our last strategy was elimination – now its almost learning to live with a virus.”

Michelle would beg to differ.

The plan B group have decided to take my words out of context and use their PR agency to try and imply that I think that people should be infected with COVID.
This is not true, I don’t believe this and never have.

Thornley and the Covid Plan B group want a new strategy and objective, and claims there have been miscommunication, operational mistakes, and social discord.

About New Zealand and it’s response Joseph Stiglitz has said:

It’s a country in which competent government relied on science and expertise to make decisions, a country where there is a high level of social solidarity — citizens recognise that their behaviour affects others — and trust, including trust in government.”

And Forbes would also beg to differ, ranking New Zealand’s response as second only to that of Germany’s.  And, get this, having the best international quarantine response.

Up against a virus that is that evil and that pernicious it has affected nearly a thousand health care workers in Victoria alone New Zealand can continue to be proud that we are holding the virus at bay.

I sense out in the electorate there is greater despondency about the virus after the second outbreak happened.  The realisation that we are probably going to go through lockdowns at different times in the future until a vaccine is discovered is not the sort of thing that you want to contemplate.

But so far the score is New Zealand 2, Covid 0 and the vast majority of people appreciate the efforts that Jacinda Ardern and the Government have put into New Zealand’s response.