The Press (Budget Doesn’t Impress Family) looks at the effect of the tax cuts on an average family with a combined income of $78,000 and two kids under 12 . They will have $42 more a week from tax cuts and boosted Working for Families tax credits come October 1.

That’s like getting paid for three hours extra work a week on their wages. Seems like a bit to me, and it’s only part of the picture. Here’s how this family’s tax bill is brought down by Working for Families and the tax cuts through to 2011:

That’s a reduction of 55% on the tax bill for this family, worth $152 a week. More importantly, the Government has managed to do give those cut and put more money into public services, pay down debt, put away money for superannuation, and invest in infrastructure. These cuts have come without sacrificing spending and have targeted families on low to middle income. 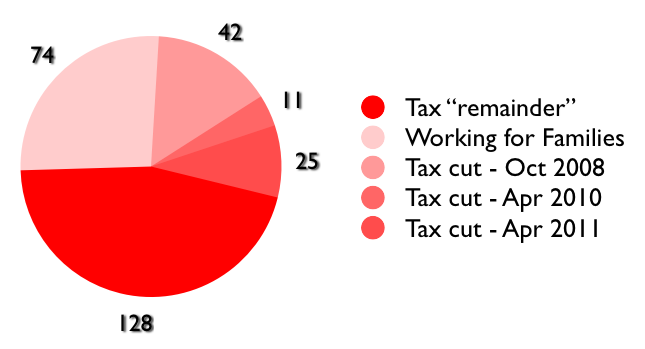