Five law enforcement officers have been shot dead in Dallas, Texas. Three suspects have been captured and one suspect, holed up in a garage, has apparently just shot himself.

This is the worst day in the history of the city of Dallas since November 22, 1963.

The dead are working people, most probably union members, mortgage payers, parents; good people just like you and me. They were working to keep a peaceful demonstration safe. The didn’t deserve to die.

Philando Castile and Alton Sterling are no different. All seven killed in the last few days, and the many others unnewsworthy, died because of American gun culture.

The greatest terrorist threat to the United States of America is the National Rifle Association. 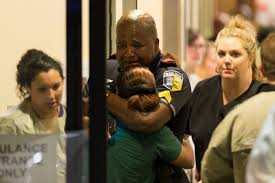