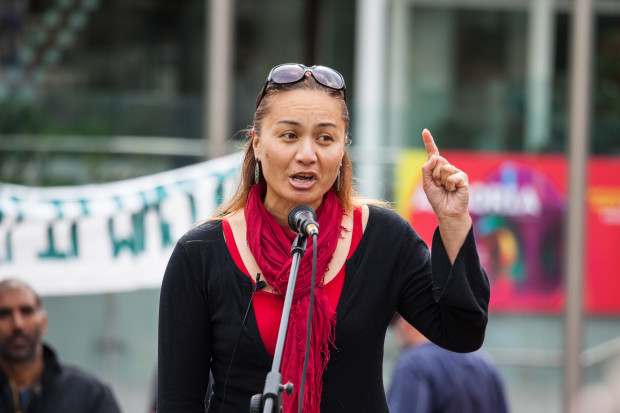 A boat on which Green MP Marama Davidson was a passenger of, bound for Gaza has been intercepted by the Israeli navy.

The yacht sailed by a dozen women was intercepted by the Israeli Defence Forces and was being towed to the Israeli port of Ashdod.

Many of those on board, including Ms Davidson, pre-recorded statements in the event their boat was intercepted.

The Women’s Boat to Gaza activists aimed to peacefully protest at Israel’s decade-long blockade and draw attention to the humanitarian situation in Gaza.

Israeli personnel – men and women – boarded the Zaytouna-Olivia which had set sail from Barcelona last month, Reuters reported. A military spokeswoman said no force was required to stop the vessel.

The Green Party has responded.

We are calling on Israel to swiftly release Ms Davidson and the rest of the crew of the Zaytouna-Olivia, and to end the illegal blockade of Gaza,” Green Party co-leader Metiria Turei said.

“This inhumane blockade has been in place for a decade, resulting in plummeting living standards and health services, high unemployment, and severe food insecurity for the people of Gaza.

“More aid is urgently needed to help rebuild the homes, public services and livelihoods that were destroyed in 2014 in the war between Israel and Hamas.

Ms Turei said Parliament expressed support for the Women’s Peace Boat to Gaza and she hoped MPs would join the Green Party’s condemnation of Israel’s actions.

Israel maintains that the blockade is necessary to prevent munitions from being smuggled into Gaza.  But intercepting ships on the high seas has always been problematic if not illegal, even if they do contain munitions.  And clearly this ship is not containing munitions.

Israel’s naval blockade of the Gaza Strip violates international law, a panel of human rights experts reporting to a UN body said on Tuesday, disputing a conclusion reached by a separate UN probe into Israel’s raid on a Gaza-bound aid ship.

The so-called Palmer Report on the Israeli raid of May 2010 that killed nine Turkish activists said earlier this month that Israel had used unreasonable force in last year’s raid, but its naval blockade of the Hamas-ruled strip was legal.

The Mavi Marmara ship aboard which Israel’s raid of a Gaza-bound flotilla left nine Turkish activists dead. The Palmer Commission report on the May 31, 2010 events was leaked on September 1, 2011.

The four-year blockade deprived 1.6 million Palestinians living in the enclave of fundamental rights, they said.

“In pronouncing itself on the legality of the naval blockade, the Palmer Report does not recognize the naval blockade as an integral part of Israel’s closure policy towards Gaza which has a disproportionate impact on the human rights of civilians,” they said in a joint statement.

Meanwhile the situation in Gaza is deteriorating further with unemployment standing at 40% and with the civilian population suffering from extreme hardship.