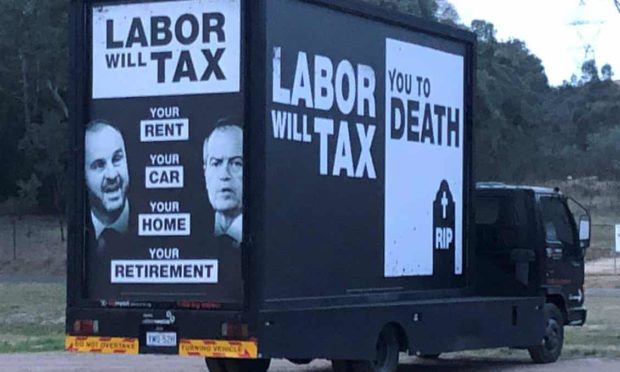 As everyone gets their head around what happened in Australia news is coming out about the role that social media played.  And it was not a positive role.

Out of curiosity – who of you on twitter saw the “death tax” scaremongering turn up on Facebook? #auspol

The responses are concerning.

The spread of misinformation appears to have gone far and wide.

And this particular allegation has been circulated for a while.  In April Labor demanded that Facebook take these posts down but clearly this did not happen.  From the Sydney Morning Herald:

Labor has demanded Facebook investigate apparent “fake news” posts claiming the opposition is planning to introduce a “death tax” on inheritances, in the first major test of the social media giant’s promise to crack down on false election material.

The posts and messages shared via Facebook messenger incorrectly claimed Labor had signed a covert deal to bring in a 40 per cent inheritance tax and carried a link to Treasurer Josh Frydenberg’s website, though the Liberal Party said it was not behind the posts.

“Labor, the Greens and unions have signed an agreement to introduce a 40 percent inheritance tax,” the crudely written message states.

“Everything you own cannot go to your kids or next of kin at death 40 percent goes to the govt. Please share this with all your friends.”

One Nation has been running with this line for a while, but the Liberals more recently got in on the act.  A Canberra Liberal advertising truck had the slogan, “Labor will tax you to death” printed on it, clearly implying that a death tax was on the cards, and Josh Frydenberg, LNP Treasurer said that an inheritance tax under Labor was not out of the question because the idea has previously been favoured by opposition frontbencher and economist Andrew Leigh as well as the union movement.

There was also a scaremongering press release from a fictitious housing organisation and Scott Morrison also got in on the act.  From the Sydney Morning Herald:

Mr Morrison said “it sounds to me that he has struck a deal with the Greens” and questioned what the terms would be.

There was also the perennial if Labor gets elected your rents would go up with a scaremongering letter sent to many tenants. From Danielle Wood on ABC news:

The lowest blow of this election campaign may have come from a firm of real estate agents that abused its position of trust to scare renters about Labor’s proposed negative gearing changes.

If you are one of those renters, relax. You have nothing to fear from the changes. You might even benefit from them. The only interests the real estate firm is protecting are its own.

Late last week Raine & Horne principal Graham Cockerill wrote to tenants saying Labor’s changes would be “devastating” and included material from the Real Estate Institute of Australia warning of what might happen if “the planned changes to negative gearing do go ahead”.

“The fall in property prices will decrease the value of 18 million Australians’ retirement nest eggs,” and “rents will rise” the material warns.

“Further, government savings will be less than estimated, unemployment will rise and our whole economy will be in jeopardy.”

It’s a jumped-up scare campaign. But some renters may give it more credibility than it’s worth because some of it comes from the people who normally notify you when your rent is going up.

Of course the claim is absolute bollocks.  Reversing negative gearing should reduce house prices which should then have a negative effect on rentals.  It is appalling that the claim was even made.

What effect did these have?  In a very tight election you have to wonder.

And what should we do?  Singapore recently passed a law that requires online media platforms to carry corrections or remove content the government considers to be false.  Penalties can be as high as prison terms of up to 10 years or fines up to NZ$1.1 million.

I am not advocating that New Zealand should do the same.  But Facebook and Twitter and the other social media providers should have a legal as well as moral obligation to deal with these events when they are pointed out to them.

If you really want to get concerned this discussion by Tom Barraclough about deepflakes and synthetic media will do the job.

We live in very interesting times …