Delta Covid – the battle so far

As Tamaki Makaurau enters week four of lockdown things are at an interesting stage.

Daily infection rates have dropped steadily but plateaued recently. We all cheered when they reduced and the vast majority of us thought we were going to deal with delta the same way we had dealt with the other variants. But recent incursions and news has suggested that we may not get out of this as easily as we thought.

The first lock down lasted for nearly five weeks. This lockdown will do the same, at least.

My impression is that this time the response is much more sophisticated.  Instead of being fed daily infection numbers we now have infection numbers, are they epidemiologically linked, is the source of their infection unknown.  Multiple new infections is superficially bad but if they are from known infection sources and they have not been out in the community while infectious then all good.

I hope I am not tempting fate but Aotearoa has a chance of doing something other nations have not been able to do and that is beating back Delta.

The reasons are pretty simple, complete respect for the scientific advice amongst the Government and the vast majority of the population having trust in what is happening and being willing to do their part.  Instead of letting big headed political egos make a final call, influenced by the preferences of party donors, Aotearoa decided to do what the intelligencia advised us to do.

The vaccination roll out has recently accelerated and New Zealand has some of the highest daily vaccination rates in the world.  We are making our way up the table of OECD nations and are now ahead of Australia,Mexico, Colombia, Latvia, Slovenia in terms of doses administered per head of population. And the roll out is proceeding as planned, but with a recent surge. 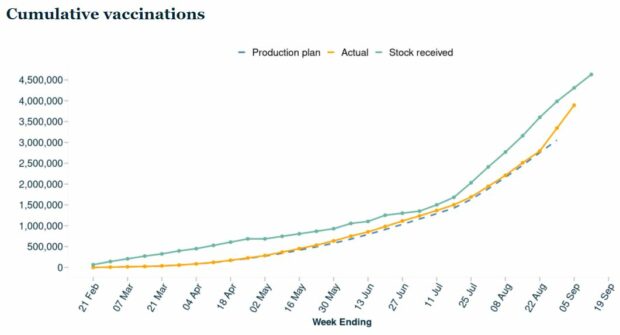 The rollout has quietened the naysayers who have complained that everything was bad.  As I have said before it is the end position that is important, not the mid way position.  And because community spread has been so limited we have had more time to make sure the roll out is done properly.

And for those who were claiming that the country would “run out” of vaccines recent deals conducted with the Socialist empires of Spain and Denmark have stopped that particular scenario from happening.  Who would have thought that Ardern’s Socialist Youth contacts would have been so helpful.

There is one aspect of the spread of the virus which is clear, it hits poor areas hardest.  Mangere, Favona, Massey, Manurewa, Otara, Papatoetoe and Henderson are all low socio economic areas,  And you know when numbers are boosted by 7 or 8 people in a household all succumbing to the virus that overcrowding is a feature.

With 68% now of the target population now having had a first vaccine and 77% being booked the next month should see the rate continue to improve.  We may still get out of this in remarkably good shape.

And there will be a debate one day about when we open up and change our approach.  But that day is not today.  In my view elimination remains the only viable strategy.