Latest polls and some anecdotal evidence from the doorstep are showing a move back to the Tories in Britain. If so it may in part be due to last-minute dark and dirty personally targeted Facebook advertising to voters in marginal seats. They cost so will need to be watched later on here. 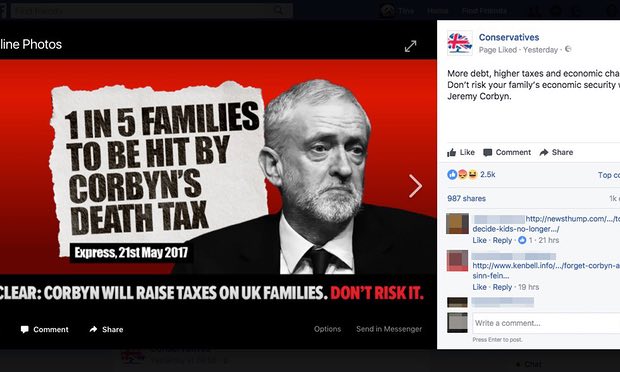 The strategy was revealed in the Observer, with the example drawn from the marginal seat of Delyn in Wales.

The article reveals that the Tories also purchased Facebook ads to drive up the costs for a charity trying to persuade young people to enrol.

More information here and from Buzzfeed with details here.

Tories are refusing to give the Electoral Commission copies of the ads so as to ensure the Commission cannot ascertain whether they are local or national ads. This comes at a time when one MP is being prosecuted for exceeding the limit at the last General Election.

This ad has also been extensively used. The Australian calls it American-style negative advertising, used for the first time in the UK which has previously banned or like New Zealand limited broadcast television advertising. But the format is classic Crosby. If it gets closer here in September, be warned and watch out.