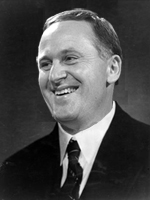 Prime Ministerial candidate for the Nationalists, Mr John Key, today laid out his party’s policy regarding New Zealand’s participation in the current War.

“Let me state clearly and unequivocally that, despite our past position, my Party now believes wholeheartedly that the War must be fought. It is undeniably a serious issue.

“However, I do not credit the extreme claims of certain extremists as to the outcome if this war should be lost. The current Labour government’s policy has gone too far” said Mr Key, addressing a meeting of businessmen.

“In responding to this threat, we must balance our defence of freedom responsibilities with our economic opportunities”

“Whereas Labour has committed to open-ended expenditure in the conduct of the War, which has already totalled many millions of pounds, the National Party believes that New Zealand would be better placed if it were to slash this spending and, instead, cut taxes on Kiwi families by north of five shillings a week for a man on the average wage”

“Furthermore, what is the point in New Zealand doing its utmost when major powers such as the United States of America and the Soviet Union will not do their part? New Zealand should not be out in front on these matters while far larger countries remain uninvolved. Under my government, rather than being a world leader in participation in this war, New Zealand will be a fast follower.

“I know that leading generals have said that each Allied nation must increase its contribution to the war effort by 40% if we are to prevail but I think that too costly. Instead, I am willing to commit to an aspirational 10-20% increase in our armed forces.”

“On the Home Front, I know that many Kiwi families are tired of Labour’s ‘Father State’ telling them how to live their lives. If I am Prime Minister, my government will end conscription and rationing. We in the National Party trust that New Zealanders will be able to make their own rational decisions and the operation of the market will ensure a fair distribution of food and adequate contribution to the War without the need for regulation.”

Mr Key will next week be appearing on the Aunt Daisy’s popular morning radio programme on the ZB network to read a list of the Top Ten things to do with one’s lard ration.

21 comments on “Dispatches from the parallel universe, John Key 1940 ”