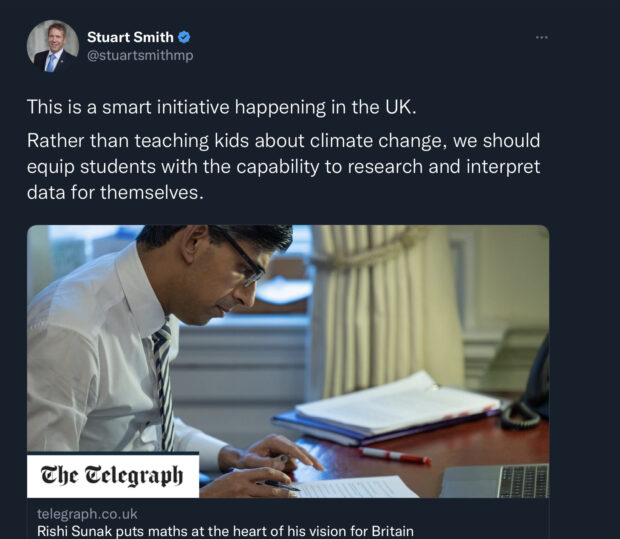 It has received a significant amount of blowback, as it deserved.

Fancy proposing that climate change should not be taught in schools.  As the world struggles from the effects of climate change and the need for individual action has never been more pronounced to suggest students should not be alerted to this accelerating catastrophe is bizarre.

And fancy suggesting that students armed with sufficient skills should sift through the huge amounts of data that climate change science has accumulated and second guess scientists who have spent decades interpreting and understanding the data.  Now is not the time for second guessing.  Now is the time for remedial action.

And fancy implying that once they had completed their sifting they may reach a contrary view and that this contrary view is valid.  How many times do we need to show that climate change is actually a real thing?

The tweet follows the right’s tactic of dividing and picking sides.  There is a sufficiently large anti intellectual anti collective action grouping for which challenging climate change scores brownie points.

And it is not surprising.  When you look at National’s policy priority areas there is no mention of the environment.  Nil, zilch, nada, zero, a complete void, not even a fly speck of a mention.

It is almost as if we live on two different planets.

On Planet progressive it is clear the environment is changing dramatically, species extinction is accelerating, resources are being depleted and there is a clear sense that we are heading into a disaster.

On Planet National there are abundant resources, growth can be infinite and the extraction of wealth is of utmost importance and can be achieved without adverse consequence.

Some National MPs are not stupid.  They understand the science and know what the world has a major problem.  But they clearly place political advantage ahead of leading collective action.

Smith in particular ought to know better.  He is chair of Globe-NZ, a grouping of Parliamentarians from different parties that is exploring subjects such as discovering long term low emissions pathways.

Stuart Smith should be thanked for laying National’s approach out for us so publicly.  And the next time someone suggests that both sides are the same remind them that there is only one side that actually believes in the science and is trying to advance policies to address the issue.  And that the other side is happy to play games with the issue.