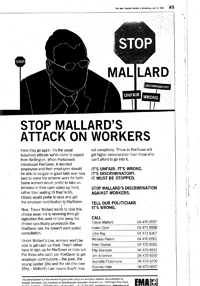 The Employers and Manufacturers Association’s advertising campaign to defend the ability of employers to make workers pay their own Kiwisaver employer contribution while pocketing the taxpayer subsidy is the most hamfisted and transparently cynical piece of PR I’ve seen in some time.

It’s outragous that the EMA should claim it’s standing up for workers’ rights when it is really just trying to protect bad employers. But it’s not surprising. This is, after all, an organisation that has opposed every single gain made by working people in the last nine years and has an industrial arm that helps employers dismiss their workers and cut their pay.

It’s, therefore, no surprise that the EMA has had to resort to running an expensive advertising campaign (they can’t actually mobilise any workers in favour of their cause) and the media have seen it for the blatantly cynical PR move it is.

What’s more, this whole embarrassing exercise may be in breach of the Electoral Finance Act. I’ve just had a tip-off from a reader who has laid a complaint with the Electoral Commission this afternoon.

It turns out the EMA has failed to register as a third party, which means it has an election spending limit of $12,000. Today’s ad was a half page full colour in the Herald, putting it at around $15,000 according to a recent rate card and pushing the EMA well over their legal spending limit. The ad also entangles the New Zealand Herald, which is in breach for publishing it.

Judging by the text at the bottom of the advertisement it appears the EMA knew this would be the case all along but thought they could get around the law by passing it off as issues advertising, which is exempt under the Act. A quick look at section 5 of the Act shows this is not the case. It’s expected the same ad will appear in the Dominion Post tomorrow morning, at a cost of around $8,500. This ad will also be in breach of the EFA, as will the Dominion Post.

Deliberate attempts to breach electoral law and a cynical attack on workers – is this the best the EMA can do? Crappy ad design too.

[On a related note, if you haven’t heard it already Alasdair Thompson lost the plot up against Trevor Mallard today on Morning Report. I never thought I’d see dear old Geoff have to turn someone’s mic off before, but Alasdair’s behaviour sure warranted it.]

55 comments on “EMA Kiwisaver campaign in breach of EFA? ”