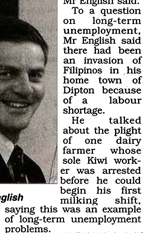 Oh dear. In the same week Lockwood Smith made his racist remarks and Maurice Williamson committed the gaffe of talking openly about National Party policy, it appears Bill English pulled a wee Lockwood of his own.

According to the Ashburton Guardian, English complained to a local Greypower meeting about the Filipino ‘invasion’ in his home town of Dipton and talked about the plight of a poor farmer ‘whose sole Kiwi worker was arrested before he started his first milking shift’.

The issue of migrant workers from the Phillipines is a contentious topic in Southland, with the Sunday Star Times recently reporting that migrant workers have been abused, isolated and ignored by the mono-cultural locals.

Comments like this from Bill English, their local MP, are unhelpful to say the least.

UPDATE: Sounds like Bill actually said ‘infusion’ rather than ‘invasion’ and was misquoted by the Ashburton Guardian. Good to hear.

64 comments on “English pulls a Lockwood ”