Farrar in an act of pure vanity…

In an act of pure vanity, David Farrar is whining about the a by-election that will probably be held in July – less than three months before the House dissolves for the election.

Farrar even points out the relevant law

Parliament can only resolve not to have a by-election if the resignation occurs within six months of Parliament automatiically dissolving (22 May) or the announced election date (26 May).

So this particular electoral case has been envisaged by parliament and put into statute. So what is Farrar whining about?

As a comment here by Thomas Farrow put it.

Yes its interesting reading the attack lines on Kiwiblog
Apparently its OK to force a by election a year out from an election as was the case with a certain Maori co leader, but not OK when its 7 months, I wonder which , 8 9 10 or 11 months would be acceptable?
I guess that is why we have a law that gives an exact time, namely 6 months.

Looks to me like Farrar is merely stroking his ego or something. If it was such a democratic problem then he always has the option seeking to change the law – using the democratic process. What Farrar failed to argue about was the advantages or disadvantages of having such a by-election on the person that was causing it to happen or for any other political considerations.

For the Mana party like any new political party the advantages are obvious. It allows a shakedown of the nascent campaigning organisation,  whilst getting a renewed mandate from the electorate who voted for a member of a different party. After all the gradual disassociation of Hone Harawira from his former party has been going on for quite some time. Effectively this will give the voters up North a chance to express the opinion on that. But probably more importantly for the Mana party, they will be able to generate free publicity prior to the actual election campaign starting off.

The big risk for the Mana party will be if they don’t get a clear unambiguous mandate.

None of these political topics were canvassed by Farrar. You’d have to say that what he was doing was a simple dog-whistle for the rabid participants of the sewer. That interpretation is supported by the other dog-whistle topics raised in the post as asides. Whining about something that parliament has specifically made provision for just makes him look like a political dork.

On the the other main right blogger, I did like Fran O’Sullivan’s article about the Brash hostile takeover.

When I revealed on March 12 that Brash and Banks were looking at either starting a new right-of-centre party or taking over Act, blogger Cameron Slater commented:

“I am also pretty sure that Banks and Brash know that electorally they are rat poison as candidates. They are both pensioners, with Brash over 70. They also both know that their best years politically are behind them.”

This time around, Brash’s strategists let Slater into the play: the direct onslaught was “open and honest but not fair”. And as for The Don’s age – don’t mention it. 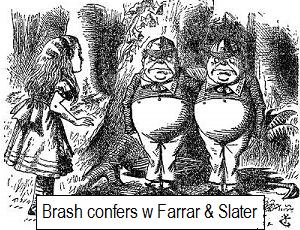 Carroll, having introduced two fat little men named Tweedledum and Tweedledee, quotes the nursery rhyme, which the two brothers then go on to enact. They agree to have a battle, but never have one. When they see a monstrous black crow swooping down, they take to their heels. The Tweedle brothers never contradict each other, even when one of them, according to the rhyme, “agrees to have a battle”. Rather, they complement each other’s words. This fact has led Tenniel to assume that they are twins also physically, and Gardner goes so far as to claim that Carroll intended them to be enantiomorphs, i.e., three-dimensional mirror images. Evidence for these assumptions cannot be found in any of Lewis Carroll’s writings.[4]

They most often appear to me to be a mirrored sock-puppets lending their use to various right factions. Their erstwhile ‘differences’ are orientated more to trying to control the political framing between themselves. I find that when I look at their political writing with that perspective in mind, the machinations become pretty obvious and quite tediously boring.

64 comments on “Farrar in an act of pure vanity… ”