Fire and Fury over North Korea

Donald Trump may not know much about the last time the United States Air Force unleashed fire and fury over North Korea. The Koreans certainly remember it.

In the later stages of the Korean war in the 1950s, unchallenged B-29s used bombs and napalm to bomb Korea flat. Every city in North Korea was completely destroyed, more than in Germany and Japan during the Second World War. Gen Curtis Lemay boasted that the United States Air force killed off 20% of the population of North Korea over a period of three years.

That is why Korea has put its Army and air force underground. They have learnt the lesson that the only way to stop America from doing it again is to have nuclear weapons as a deterrent.

It is way past time for a different approach to be taken. Bluster from both sides endangers us all. The Americans and the North Koreans need to talk to each other without any preconditions, and the first move should come from the Americans. That is the only hope for peace. 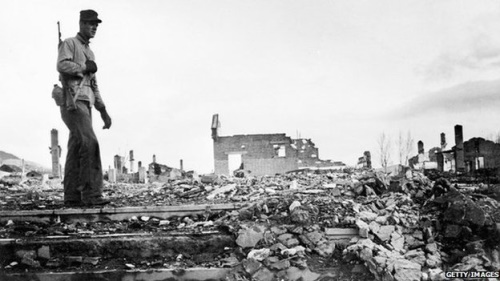 60 comments on “Fire and Fury over North Korea ”