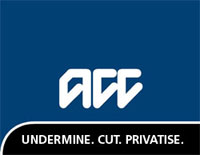 The first thing you need to understand is ACC is not spending more money than it is taking in through levies. It is not going bust. It is not ‘making a loss’ despite what Nick Smith writes and the media faithfully repeats, but, then, they got taken in by this same trick six months ago.

What is happening is that ACC is building up a huge amount of assets, savings. These savings are to pay for the entire future cost of claims that are being made now and that is turning out to be a more difficult process than expected. Here’s ACC’s very good explanation:

Until 1999, ACC operated under a â€˜pay-as-you-go’ basis, collecting only enough levies each year to cover the cost of claims for that particular year. In 1999 the Government decided to change ACC from â€˜pay-as-you-go’ to a â€˜fully funded’ way of operating. That means we now collect enough money during each levy year to cover the full lifetime costs of every claim that occurs in that year.

Some people who are injured need ACC’s help for 30 years or more, so significant reserves must be built up to fund these future costs. This money is invested and earns interest that helps pay the cost of claims.

This fully funded model is fairer for levy payers. Future generations of levy payers won’t be paying for injuries that happened years before as the cost of those claims will already have been collected.

In the future, being fully-funded will mean ACC levies will be lower than they otherwise would be. For now, they are higher because as ACC is transitioning from ‘pay as you go’ to fully funded’ it needs to build up a pool of billions to cover the future costs of current claims and its assets are less at the moment, as ACC explains:

The Scheme’s claim liability (the future cost of existing claims) now stands at $23.8 billion against current net assets (the money ACC has â€˜in the bank’ to cover those future costs) of $11 billion.

But that’s basically just a book-keeping/cost-spreading exercise (most of ACC’s assets are actually government bonds, so the government (Treasury) owes itself (ACC) money).

ACC isn’t losing money. Its revenues were $4.5 billion – $1.5 billion more than it spent on claims this year. $500 million of that extra is operating costs, the other $1 billion was added to ACC’s investments but changes to predictions of the future costs of current claims pushed out that target even further – by $5.7 billion. So, getting to being fully funded is $4.8 billion further away than it was before.

There’s no actual crisis. Despite Nick Smith’s hysterics over ‘increased costs’, the cost of new claims isn’t rising (steady at $1.7 billion for the last 2 years). ACC is making enough money. The ‘crisis’ is just modelling changes for a bookkeeping exercise that has no effect other than to make levies higher now so they won’t have to be as high later.

It’s not the end of the world. ACC isn’t broken.

Now, it is going to be harder to complete the move to being fully funded by 2014, which is the Government’s target, without increases to levies. Pretty simple solution to that, push back the date. Labour was going to move the date back to 2019 and the Government has just announced it will adopt that idea. Take ten years to move to fully funded rather than doing it in five. It makes no real difference except there’s no need for big levy hikes.

That hasn’t stopped all the amateur dramatics from Nick Smith. He was on RNZ this morning still confusing the issue by claiming that the rising target to being fully funded is due to entitlements. He made no attempt to explain to people that ACC is safe and functioning perfectly well, fully funded or not. But, if he did that he wouldn’t get to paint ACC as mired in crisis. And, if he couldn’t create a false air of crisis, how would he soften the public up for privatisation?

49 comments on “First, manufacture a crisis… ”