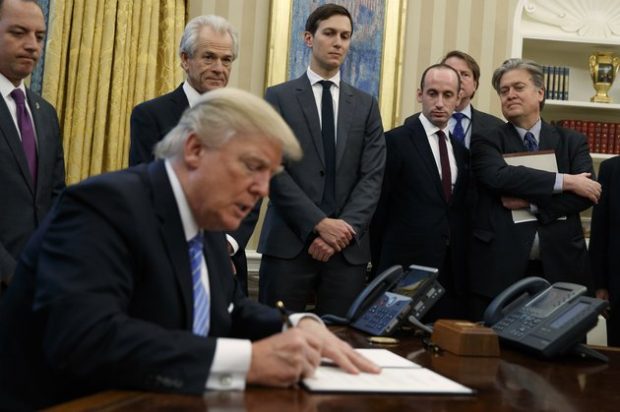 As quoted during the election campaign, Donald Trump said “I think Islam hates us.” Now-President Trump’s approach to Islam and Islamic immigration in to the United States is cataclysmically wrong. His first bungled measures against Muslim-dominant countries, and his new version announced yesterday, illustrates where his administration is going. Good news is that Iraq us no longer an immediate exclusion. So it’s down to six Muslim countries banned. But Trump’s fear of Islam is wrong on at least five counts.

Could the world’s 1.6 billion Muslims overcome the rest of the world? Islam may well at some point become become the dominant religion in the world. But do Muslim countries have the ability to conquer the world? There are 47 Muslim-majority countries in the world, with a combined GDP of about US$5 trillion. The US has a GDP of $17 trillion by itself. The EU about the same. No match for any fictitious pan-Muslim coalition.

Muslim-majority countries spent roughly $270 billion on defence last year. Subtracting US allies like Saudi Arabia and UAE (US$87b and US$22b respectively), brings that down below US$200b. Even excluding all its allies, the US spends US$600b a year.

There’s no aircraft carriers, long-range bombers, or nuclear submarines in a pan-Muslim alliance. There’s very little power projection available at all. Even Saudi Arabia’s intervention in Yemen shows pretty limited in effect in its own neighbourhood. A massive international intervention from a Muslim country or countries is not a threat on the horizon. The Siege of Vienna was in 1529.

My uncles remember the Axis. I remember the communist monolith. Trump has a new united thing called “radical Islamic terrorism”, like it’s some tightly integrated and centrally directed movement. Nope.

Most of the conflict in the Middle East is between different kinds of Islam and pan-family allegiances within, and their proxies. And there’s vast geographic and cultural differences between Morocco and Indonesia, or Brunei and Mali. It’s not easy for terrorist groups to be coherent, as we are reminded by Monty Python.

That doesn’t mean there’s no threat, it means it’s not a monolithic rising tide.

I would have thought that the smarter strategy would be to simply escalate ‘divide and rule’ against the terrorist minority. Work on bringing the great majority of Muslims onto a common side, rather than labelling all of them.

Granted, it‘s a threat. And new Muslim migrants have caused real social problems particularly in northern Europe. Whole governments are overturning on such fear. But compared to car accidents, smoking, or playing Rugby, one could be forgiven for Fox viewers thinking Islamic terrorism was far more likely to get you than any of them. Since and including 9/11, the likelihood a US citizen will be killed by a terrorist is less than 1 in 3 million per year. The lifetime risk is about 1 in 45,000.

That’s better odds than being killed by lightning, falling out of bed, or choking on food. It’s a real threat, it’s just pretty unlikely. Trump is being spooked by weak adversaries and over-hyped tv news. I wouldn’t want Trump having to face a really substantial and dedicated threat, and he hasn’t met one yet.

Seriously, this anxiety almost sounds right out of Dr. Strangelove, and especially Brig. Gen. Jack D. Ripper’s rants about fluoridation and the need to protect our “precious bodily fluids.”

There are about 3.3 million Muslims in the United States. Maybe that gets to 2% by 2050. There’s 69.5 million Catholics. In fact there’s about 15 million Mormons, and not even Utah gets to form its own religious courts.

One could try and defend the inherent superiority of one kind of belief system over another. It’s an argument for another day. If U.S. leaders keep demonizing an entire religion, impose ill-considered bans on Muslim refugees, and most important of all, continue to intervene throughout the Arab and Islamic world with military force, they will convince more and more people that Osama bin Laden, Khalid Sheikh Muhammed and Islamic State leader Abu Bakr al-Baghdadi were right when they claimed the West had “declared war” on their religion. For Steve Bannon’s view, read this.

The US has a pretty dark history of seeking and investigating internal threats, and forming a self-fulfilling prophecy out of them. In the New Zealand novel “Smith’s Dream” and the film “Sleeping Dogs”, New Zealand has its own communist insurgency. The US response, and local counter-response, follows pretty similar patterns to what we’ve seen from the U.S. fruitlessly invading other countries over hyper-inflated threats.

Insofar as Donald Trump’s team have a foreign policy, a big part of it appears to be forming the world’s Muslims into one big threat. It’s self-reinforcing, and it’s not a useful reading of threats. It feels like just another Vietnam, just another Afghanistan, on the horizon. Terrorist threats from Islamic extremists are real. But the U.S. Trump administration continues to respond really, really badly to them.

20 comments on “Five ways Donald Trump is wrong about Islam ”