Yes Mr and Ms Work-Life-Balance, science is on your side. 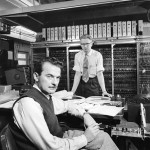 "According to the computer, we shouldn't be here today Billy"

The full results of this experiment won’t be published until October, but an ongoing survey of 100 buildings suggests energy consumption has fallen by around 13 per cent. The survey also found that 70 per cent of employees prefer the 4/10 arrangement, and that people took fewer days off sick.

Now if only we could convince John Key of the value of science. But I guess we shouldn’t expect too much from a man who called climate change a hoax.