Yesterday, my comrade Zetetic wrote that despite all the bad stuff in the Budget there was still a “meta-victory” for the Left because the ‘social wage’ hadn’t been attacked. That is, health, education, and social welfare aren’t cut in this year’s Budget.

Well, I’ve been doing something Zetetic has probably been wise enough to avoid. I’ve been digging into the Budget (specifically the Budget Economic and Fiscal Update) and Budgets past to look at the spending tracks over the last few years and what National plans to spend in the ‘out years’ (the next three after this coming one). I found out these totals, then I got the inflation and population growth numbers (past and projected). That let me work out the amount per person adjusted for inflation that is has been and will be spent in the big areas of Health, Education, and Law and Order (I’ve left out welfare because that’s not within the government’s control unless it changes eligibility or payments).

It makes some distinctly bad reading. 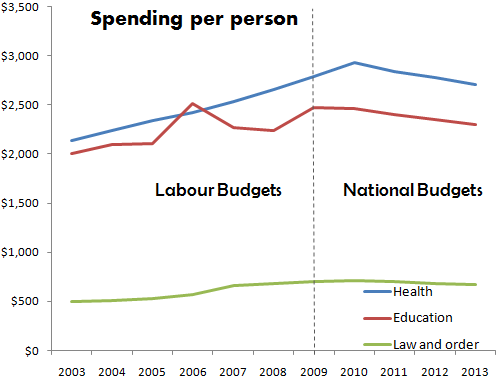 Plain numbers are pretty hard to imagine but instead think what 8% fewer doctors and nurses per 1000 people or 7% fewer teachers or 6% fewer Police means for the public services we rely on every day.
-Marty G