You’ve got to hand it to Kim Dotcom for his great choice of timing and ability to make the MSM headlines. John Key is leading the House into unnecessary, and politically motivated urgency to push through his anti-democratic Big brother GCSB surveillance Bill.  Meanwhile, Dotcom’s lawyers have released a 39 page white paper making a range of allegations.

Dotcom’s arrest and the subsequent legal proceedings have set in motion activities that Key has opportunistically used to legally increase the state’s ability to spy on activities of any individual or organisation within the country that they choose. 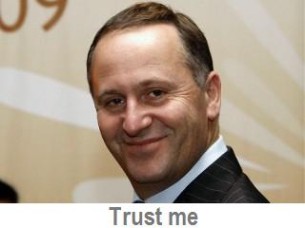 People should take heed of Chris Trotter’s well-considered warnings; ones based on past evidence of NZ state authorities spying on Kiwis, sometimes for politically and/or commercially motivated reasons.

Using the enhanced powers of surveillance bestowed upon it by the new legislation, and operating entirely within the expanded legal parameters it establishes, the “New Zealand Intelligence Community” (as Rebecca Kitteridge calls it) will very soon have the authority to spy upon organisations as old as the trade unions and as new as the groups determined to prevent New Zealand signing the Trans-Pacific Partnership free-trade agreement. Greenpeace’s latest campaign against deep-sea oil exploration could also be targeted. The grounds? That it poses a direct threat to “the economic well-being of New Zealand”.

Protecting the economic well-being of the nation has been one of the New Zealand Security Intelligence Service’s (NZSIS) objectives for nearly two decades. We simply do not know how many times it has been used to secure interception warrants directed at the activities of fair trade and environment activists. (The release of such information would, of course, prejudice New Zealand’s national security!)

Meanwhile, another clever political operator, who knows how to get his lines into the MSM, Winston Peters, holds his cards close to his chest.  Will he or won’t he support Key’s Stazi-style Spy Bill?  He has said that the law needs to be amended quickly.  However, he is publicly snubbing key’s request for a meeting, by which Key would aim to get Peters’ support for his Bill.

“Why would I do that? We can work this through on the facts and on the legislation, we don’t need to have to go and have a private sitdown like some parties want to do every five minutes.”

“It’s better we just work our way calmly through the legislation ourselves and say what we think.”

However, this Bill is too important to rush through quickly.  I don’t understand why Peters sees it as so urgent?  And his suggestions for strengthening oversight of the intelligence services look to be inadequate – papering over some cracks.

The White Paper released by Kim Dotcom’s lawyers today, makes accusations against the FBI, the US motion picture industry bosses, Obama, and the “NZ Intelligence Community.”  This shows how much NZ’s domestic and external intelligence services are cordinated with US state surveillance services.  NZ’s economic, social and political sovereignty is also at stake here.  David Fisher in today’s NZ Herald reports,

Kim Dotcom has called for an investigation into the FBI case against Megaupload in a legal review which accuses Prime Minister John Key of being misled by the United States.

The “White Paper” released by Mr Dotcom last night also alleges the illegal spying by the GCSB went on for 10 days longer than the spy bureau has previously admitted. …

It calls for investigations by US Senate oversight committees, linking the motives for the prosecution to Hollywood studios’ political contributions and support for President Barack Obama….

Dotcom alleges that Obama influenced the proceedings against Megaupload, because the president aimed to,

“… mollify the motion picture industry in exchange for campaign contributions and political support”.

Well, Dotcom probably supports the values of “neoliberal” capitalism, and is no great (US style) Democrat.  So the detailed White Paper, and its legal and political implications need careful consideration.  But so too do any changes to the laws responsible for the gathering of “intelligence” by NZ state authorities.  Note also that Trotter indicates there’s another related Bill on the table:

If you think I’m being alarmist, just take a look at the Government’s next brick in the “national security” wall: the Telecommunications (Interception Capability and Security) Bill.

In an earlier post, Trotter exposed how Key has been working towards the amalgamation of NZ’s intelligence services under his sole authority since 2009.  This is evident from the Kitteridge Report in which:

The first clue Ms Kitteridge supplies is her reference to something called the New Zealand Intelligence “Community” (NZIC). This new kid on the national security block is the sum arrived at by adding the parts known as The NZ Security Intelligence Service, The GCSB and the Department of Prime Minister and Cabinet (DPMC).

Professors Kevin P Clements and Richard Jackson of the National Centre for Peace and Conflict Studies at the University of Otago express their concern over the proposed Spy Bill.

This is no time to be complacent.  We need to keep watching the watchers, and to actively support those that resist Key’s blatant disregard of democratic processes!

The first reading of the GCSB amendment Bill began in the House this afternoon.

In his speech in the House, Peters appeared to be aiming at a statesmanlike position bringing both sides of the House together. He claims to want adequate security for Kiwis against nasty “terrorists” but also wants adequate insurance that Kiwis’ privacy won’t be breached. He said NZ First will vote against the bill at this stage.

New Zealand First has accused the Government of “bully boy” tactics in trying to stampede the Government Communications Security and Related Legislation Amendment Bill through Parliament. …

“We received a copy of the legislation and a letter from the Prime Minister yesterday morning.

“We studied the legislation, listed our concerns and made a constructive response to the Prime Minister today.

“Our response was ignored – except for a brief phone call – and the legislation was introduced under urgency. It is flawed, draconian and unacceptable in a free, open and democratic society.

“We believe the legislation has been drafted in haste and it should go back to the drafting office before proceeding any further,” says Mr Peters.