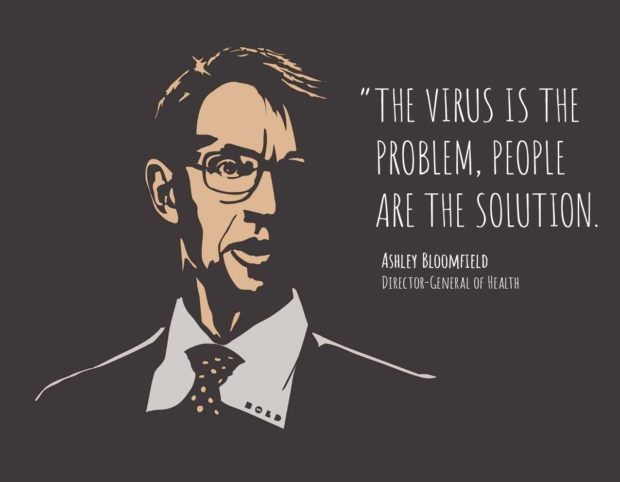 With a sense of regret for many of us Ashley Bloomfield announced his pending resignation as Director General of Health.

Some of us, probably most of the country, think Ash should be honoured for his contribution to Aotearoa and for seeing us through Covid.

There is a diversity of views.  Some think that Ash has been the leader of a World Government sponsored attempt to inject us all with chips to allow us all to be controlled.  Some seemed to be cheering for him to fail for political advantage.  Most of us are grateful although a few have bought the grumpy cool ade that National has been splashing around and think things are terrible.

If you think about the position the country is in, the sustained attacks that he has been subject to and the intense calm he always displayed his performance has been remarkable.

Who can forget the initial claims that the MIQ system was leaking like a sieve and the repeated questions about why everyone was not tested on day 11?  MIQ held the virus at bay until it was overwhelmed by Omicron.

Or the claims that PPE distribution was a disaster. While it may not have been pristine the good workers at our health coal face have coped.

Or the repeated claims that we should be allowed to use Rat Tests from the start.  Looking back the centralised testing and result gathering was the best thing that we could do.

Or the claims that the vaccine rollout was a disaster.  With world beating figures and a health system that has withstood the pressure of Omicron reality would beg to differ.

If you want to read all of the attacks rolled into one check out this Mike Hosking column.  And question if he occupies the same reality as the rest of us.

This passage is that dripping with negativity it faces the prospect of internally combusting:

Has he done a good job? I’m not sure how much of what he did was him versus what the government made him do. How much of a puppet was he for an inexperienced government that clung to the public service for dear life because they couldn’t make a decision for themselves?

What I do know is we made him a bigger deal than he should have been. Saint Ashley came about because too many got sucked in by his calm demeanour and those mad days when we literally got freaked out by the fear-mongering, the teddies in the window, the team of 5 million bollocks and the “be kind” mantra.

Nothing but relentless negativity.  It is almost as if Hosking is wanting the system to fail just so the Government can be embarrassed.

The opposition has also engaged in relentless negativity.  As an example there was an earlier attack on New Zealand offering humanitarian aid to a UN worker in Fiji. There was more recent occasions where Bishop accused Bloomfield of misleading the public over testing capability and over the supposed requisitioning of RAT tests.  To highlight National’s sensitivity over Bloomfield there was the occasion where they asked who had invited Bloomfield to a T20 cricket game.

Labour’s support for Bloomfield was mostly excellent, apart from this effort by David Clark to throw him under the bus.  Clark’s subsequent demotion had a sense of karma about it.

Although having said that there is this really weird piece written by Barry Soper who subsequently announced he was also going to spend more time with his family.  His column is Hootenish in its ability to pour unsourced bile into every sentence.

As a staunch Republican I oppose the use of knighthoods even for people who have made significant contributions to the country.  In Ashley Bloomfield’s case I am willing to make an exception.