RNZ’s report Government announces plan to help first-home buyers on the announcement from Labour today, you can pick out the details here.

All I can see is Labour tinkering so that more of the middle classes can get back into property speculation, while maintaining the property market as primarily for investment purposes not providing homes, and keeping the market on track for enhancing those investments.

Lew as always nails it succinctly,

Me, preventing fires by increasing the amount of kindling available to first fire-lighters

Buy a house for the first time, you’re on the ladder, and while the market may be cooled somewhat, it’s ok, you’ll still make shitloads of money over the next few decades as property prices increase and you might be mortgage-free by the time you retire. You will be able to borrow against that mortgage as well, so welcome to the affluent consumerist classes. At least that massive chunk of your income will be going to the bank, then you, rather than a landlord.

Nothing about renters. The only reference to rent is restrictions on landlords so that home owners are preferentially treated instead.

Build moar houses of course, but presumably most of that is for the private market, which will also keep the prices nice and buoyant for the investment classes.

Nothing about beneficiaries. Someone get back to me when Labour shows any fucking sign of talking about the massive gap between benefits and the ability to pay for housing costs. I’m of the generation that remembers when beneficiaries were first home buyers. When Ardern talks about the housing crisis being complex and needing time to resolve, it’s clear that she’s still talking about pulling up a few more people out of poverty and leaving the rest to get on with being poor.

Meanwhile, the climate and ecological crisis are banging on the door.

Where are green build initiatives? Owner/builder support? R and D for the alternative building sector who already know how to build houses at a much lower cost? NGO/Iwi/Community Housing Trust programmes? Development of new models of collective land and housing ownership? Regulation to make land available for Tiny Homes? State intervention into the rort by the building supplies industry, or the out of control costs from councils? Rent caps? Prioritising house building that sits outside of the private market?

I’m sure there are good things in the policy (Kāinga Ora, apprenticeships), and yes, go ahead and pick apart it all from the economics point of view and how the professional landlords and investors will hate it. But let’s also go up and pet the neoliberal elephant in the living room, which is that Labour want a status quo housing market with a bit less heat in it, presumably so the economy keeps floating for a bit longer.

I’ll be interested to see the responses today. I fully expect the liberal investment classes, who make up a big chunk of Labour voters, to either be on board, or to say ‘it’s not enough’ but still vote Labour ‘steady as she goes, but let’s not do anything real about poverty’ again next time instead of the progressive policies of the Greens. Because no-one really wants to pat the elephant when they’re all right Jack. 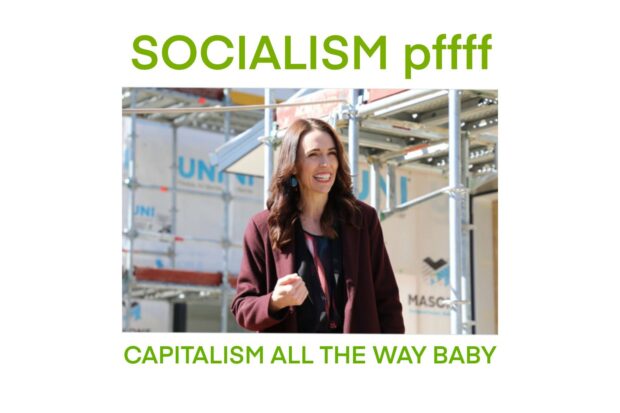