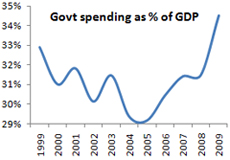 I’m kind of embarrassed. I should know by now never to trust a word out of Bill English’s mouth. I should have checked his repeated claims that government spending rocketed under Labour.

English likes to say that because of Labour government spending increased by 45% over the five years from 2004 to 2009. As David Cunliffe has pointed out there’s several things wrong with that: it’s not inflation-adjusted, it’s not population growth-adjusted, it’s not GDP growth-adjusted, and the years are cherry-picked. When you look at the last ten years of spending as a percentage of GDP, you get a very different picture from what English wants you to believe.

Let’s look at what actually happened to government spending (here and here) compared to GDP (here). There was one really low year, 2004, because GDP jumped by $10 billion a year that year. Otherwise it was pretty flat until the recession in 2009.

Another government lie shot to pieces. Now, we have to think about what’s behind the lie. It’s an agenda to slash and burn public services. Budget 2010 is going to be ugly.