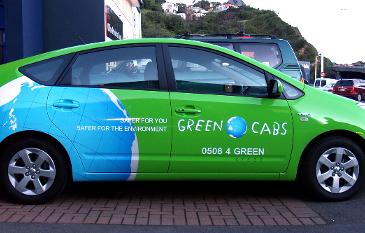 The vehicles are all Toyota Prius hybrids and the company, Greencabs, also offsets the residual emissions making it, they claim, the country’s first carbon neutral taxi company.

They tell me they’re also the cheapest in town – presumably because the fuel consumption of the fleet is so much lower.

They’ve apparently got about a dozen cabs in Wellington, increasing shortly to 20 or so and it sounds like they’ll launch in Auckland with around 30 cars.