As I write this, I’m preparing to board a Government research ship in Wellington to stop it beginning another deep sea oil survey. And if you got this email, that means I’ve made it!

To be honest, I’m terrified. I’ve never done anything like this before. But our climate is being pushed to its limits and we must all push our own limits to protect it.

We boarded the ship at dawn, I’ve climbed the mast with two friends and we’ve locked ourselves on. Together we’ve deployed a banner that reads: ‘Climb It Change’. And I can see two more people with similar banners below. They’re also locking themselves to the ship.

The ship we’re on is the NIWA research boat Tangaroa which has recently been refitted for oil and gas exploration at a cost of 24 million to the tax-payer. Now on the eve of the Paris climate talks, it has been searching for deep sea oil reserves off the East Coast of the North Island on behalf of Statoil and Chevron! It’s just madness.

We’re taking action to highlight how crazy it is that our Government is seeking new oil reserves at a time when the climate is in crisis. Finding new oil to burn is the exact opposite of what needs to happen.

We need real climate action – not more oil to burn. That’s why we’re taking action today. We want to draw attention to what our Government is doing and inspire others to take action too.

I’m prepared to stay up here as long as possible, and so are the others. Despite the nerves, we are committed to stopping deep sea oil drilling.

You can take action with us by sending a message direct to Statoil now.

The world cannot wait. We need real climate action now. All around us we’re seeing the impacts of climate change. Our Pacific neighbours are already losing their homes. And just this week we’ve seen that thousands of Kiwi families could be pushed from their homes due to rising sea levels. …

The protest has been covered on Stuff and the live feed is still active (#ClimbItChange). 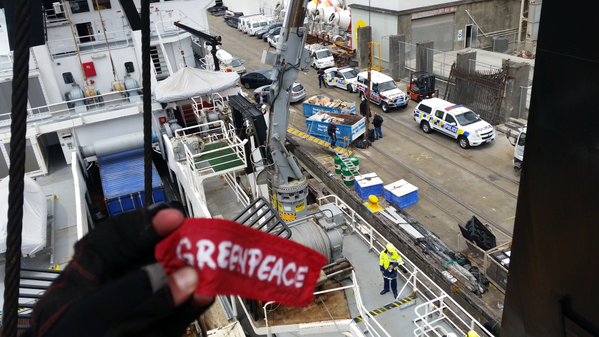