GST up? It depends

The Government’s Tax Working Group has proposed increasing GST to 15-20% to pay for cuts to income tax. I’m not automatically against GST or even raising it, if it’s part of the right package. Here’s the issues as I see them:

Points in favour of increasing GST
Taxing spending is better than taxing income: generally, the government should tax things that it wants to discourage and not tax good things like work. That’s the logic behind implementing a capital gains tax, and the same logic can be applied to GST. We buy too much as a nation, our savings rate is too low, and that is a major contributor to our current account deficit. A higher GST might change that balance some what, and allow us to take some of the burden off income. By allowing cuts to income tax, raising GST would decrease the ‘tax wedge’ (the amount an employer must pay the government on top of net wages to employ someone), which is already one of the smallest in the OECD – this could lead to more jobs.

Taxing consumption is better than taxing work: this consumerist society is environmentally unsustainable, GST as a tax on consumption can discourage it. It’s not as good a tool as precise a tool as levies or quota for resource use but it’s something.

Points against it
Elasticity of GST expenditure: The wealthy are more able to reduce their spending on things that attract GST if the tax goes up – more on housing (you don’t pay GST on a house), less on plasma TVs. The poor can’t change their behaviour to avoid the tax because they’re spending most of their money on the basics.

Fuelling housing: GST up makes putting your money in houses even more attractive. The last thing we want to do is make housing a more attractive investment. We’ve just had one housing bubble resulting from over-invesmtent in housing and, before that one has even deflated, another one is getting underway. It’s all going to end in tears and if higher GST makes the bubble bigger it will just be harder on us in the end.

GST is regressive: the poor pay a higher portion of their income on a sales tax than the rich do. 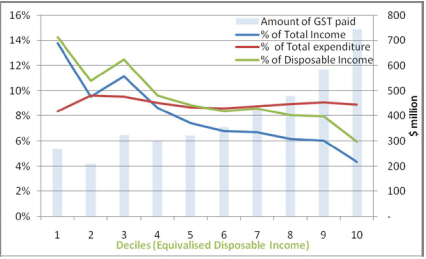 (source: tax working group)
A tax system ought to be designed so that the cost of paying for a given level of government spending is shouldered principally by the well-off, not the poor who can barely make do as it is. That means it needs to be progressive – low on low incomes, higher on high incomes. GST does not meet that test.

The big question
Who benefits?: Any increase in GST would be revenue neutral, paying for tax cuts elsewhere. As GST works against the aim of a progressive tax system, any increase should be used to make the income tax system more progressive. Increased GST revenue shouldn’t be used to pay for cutting the top tax rates – that would just constitute a transfer of wealth from poor to rich. It should be used to cut the bottom rate or fund a tax-free bracket. The revenue from raising GST to 15% could fund a $6000 tax-free bracket benefiting everyone, or it could be used to cut the top tax rate to 27%, with most of the benefit flowing to the most wealthy 3% on $100,000+ and the 2.6 million taxpayers with incomes below $48,000 getting nothing. Which do you think Key’s Government would choose?

Reforming the tax system to put the burden on consumerism, rather than work is not bad in itself. As part of a package along with a bottom-end cut to income tax and a capital gains tax, it would be OK but my fear is that this government will just increase GST to pay for tax cuts for the rich. That would be nothing but a giant transfer of wealth from the poor to the already wealthy – something no decent person should support.