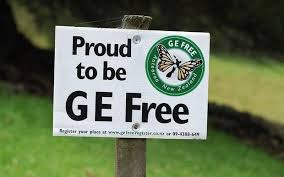 We can now declare at least one region of New Zealand GE free: Hawkes Bay.

This is after years of dogged work and really expensive District Plan hearings opposed tooth and nail by Federated Farmers, Scion the tree genetics people, and others.

The uniqueness of this victory is it’s not driven by the usual suspects. It’s driven by fruit growers who want to protect and promote the extra value they get for the privilege of being able to declare their crops GE free.

For my sins over the last week I read Margaret Attwood’s Oryx and Crake, a full-fledged gene spliced apocalyptic dystopia. Of course it pushed GE experimentation to its furthest lengths. But the message was the same: GE experimentation is wrong, it will get out of the labs, and its effects will be unstoppable and unpredictable.

Huge ups in particular to all those who donated, drafted, advocated and sustained the effort against these massive companies to win.

Although as Jenny Kirk points out:

Well – that IS good news, Ad, But…. and there’s a huge BUT coming along – the Govt has introduced a National Environment Standard for plantation forests, and at the very last moment put in a small clause which explicity allows government agencies to overturn any attempts by local councils to prevent GMO-modified plants/trees coming into their districts.

There were 16,000 submissions opposing this small clause, but it remains to be seen whether the govt will take any notice of them.