Half Key’s Cabinet at the trough

The Dompost reveals that more ministers have been using their MP’s privilege to work around the standard John Key claimed to have set on ministers taking their spouses travelling internationally with taxpayer money. 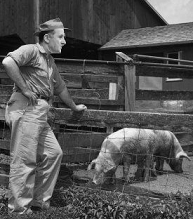 This is no rogue minister, not one person being cute with the rules. It’s a systematic move by Key’s ministers to make a nullity of his commitment that ministers would no longer use taxpayer money for international spousal travel.

Key’s excuse in all this is that he can control ministers’ use of the ministerial allowance but not the MPs’ allowance. That’s patently absurd. They are his ministers, they serve at his pleasure. If he doesn’t want them doing something he should punish them when they do.

The reality is that Key’s ban was always just more big words. When it came to actually backing up his words, Key did what he always does – nothing. More than that, his office signed off on all these ministers’ using the MPs’ travel perk for their spouses. Without Key’s sign-off, it wouldn’t have happened.

26 comments on “Half Key’s Cabinet at the trough ”