Tomorrow, the government’s Climate Change Commission (an independent Crown Entity) is opening consultation for the first time on how New Zealand should meet its climate action obligations,

We will be consulting with the public from 1 February – 14 March 2021 on a draft of our first package of advice to Government on the actions it must take to reach net-zero by 2050, and ensure a transition to a low-emissions, climate resilient and thriving Aotearoa.

As climate campaigner David Tong explains below, this is an incredibly important opportunity for New Zealanders to have a say in how NZ transitions, and that we shouldn’t leave it to the status quo powers that be,

(thread may display better on twitter for mobile users)

This will kick off weeks or months of intense debate about #climate justice and climate action. Already, the vested interests that want to keep pumping carbon pollution into the skies and cooking our futures are lining up their dishonest talking points.

So, please – use your voice. Seize your power.

When vested interests and big polluters say change is too hard, or too expensive, or someone else's job, tell them to shut up and butt out.

And when you can, submit! Tell @ClimateCommNZ your #climate stories.

4) Does this sketch out a framework for fair, just, equitable transition (eg a green new deal), or push impacts onto structurally oppressed people & communities?
5) Does this analysis uphold human rights & Indigenous rights? What about the rights of people with disabilities?

There’s a backgrounder from RNZ here, including what to expect from the Climate Change Commission’s report (due out today), and commentaries from climate scientist Dave Frame and 350.org on what should be happening. Shifting from carbon offsetting to more fundamental changes by industry, and the government being clearer on how emission lowering targets should be met seems key.

The commission is expected to recommend the scale and pace of change.

For those feeling jaded or powerless about the political inaction on climate, a few points. One is that we have a committed Minister of Climate Change, from a political party that wants far more action than we are currently seeing, and who consistently points out the importance of NZ citizens pushing the government harder. This means someone in government is listening. Here is Shaw after last week’s action by School Strike for Climate,

I’ll keep pushing in Govt and Parliament for the strongest possible action on climate change.

But we also need NZers to make their voices heard and to keep demanding more of us.

Thank you @ss4cnz. Great to welcome you back to Parliament today.https://t.co/k6LNt0n4mh

The other point is that political parties are constrained by the nature of our electoral system. We have a clunky kind of representational democracy, not a particularly participatory one. Our representatives can only go so fast if most of the people are not yet committed to change.

The corollary of that is if enough people stand up the government will follow, and this is an opportunity to be heard. The more people that engage in the political processes, the more likely it is that parliament will do what is needed. That’s me basically saying that if we want Labour, now unconstrained by NZ First, to act boldly, we need to urge them in the strongest terms.

For those that feel the Climate Commission’s plan is insufficient, there’s also the Powerdown, and we should still be taking it to the streets or wherever we each can best effect change. All political change comes first from the edge, so take heart that there are still many things we can do to influence what happens next.

Looking for ideas on what New Zealand should do? Leading edge organisations have active campaigns and plans for how New Zealand can transition justly and effectively. Greenpeace’s Green Covid Recovery and Regenerative Farming Revolution plans are good starting points, as is the Green Party’s policy platform where climate and just transition is built in throughout the policies. 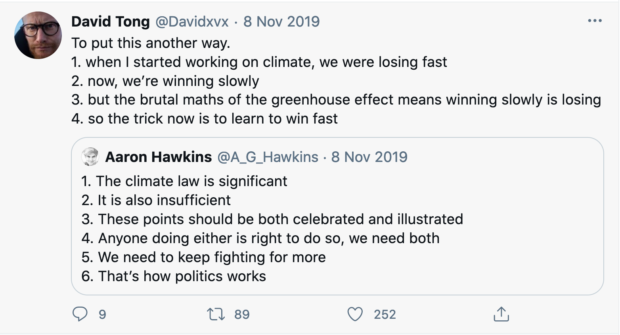 Now’s the time to fight for more.

Newsroom’s overview of the report.