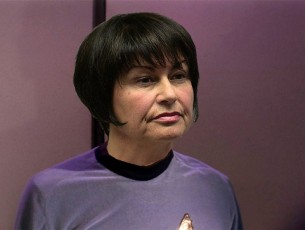 Jo Moir at Stuff has asked if Hekia Parata has gone rogue in announcing a change of the education funding formula. I am surprised she had to ask. The answer must be a resounding “yes”.

She did not sneak the announcement out. She went to the PPTA annual conference and at the same time she accused pretty well everyone present of being supporters of apartheid she announced that student academic progress was going to be at the forefront of the promised new funding policy.

For more than two years the Education Minister has been vocal about her desire to give school deciles the chop, but just what a new funding model would look like has remained a mystery.

In 2013, Hekia Parata first criticised deciles as “clumsy” and sometimes used “to explain or excuse everything”.

By 2014, she was signalling the end of them when she said schools would only need to put up with deciles “for the present and for the near future”.

In between times, she had hinted at replacing deciles with academic progress measures, but by November last year she had ruled out any funding link to academic results.

Using student achievement data for school funding is  contentious because of the fear it would punish schools dealing with the most disadvantaged children.

On Thursday, Parata did the U-turn of all U-turns and told a room packed full of teachers that student achievement would “absolutely” be a factor in a review of the school funding system.

Finally, confirmation that student success would be front and centre of a new funding model that Parata wants sorted by the end of this parliamentary term.

As pointed out however there was a somewhat major problem with Parata’s announcement.  The Ministry was not aware of it:

On September 4, Ministry of Education deputy secretary Rawiri Bell said in a statement: “We absolutely reject any suggestion we are introducing performance-based funding for schools or performance-related pay for teachers. That is wrong.”

That is a difficult statement to get muddled – it couldn’t be clearer that the ministry has no plans whatsoever to include student performance in a new school funding model.

Of course this particular announcement fits into National’s desire to help its own.  Remember back in 2009 when National cut funding for night classes and very successful literacy and numeracy programmes so that $35 million extra to private schools?

The announcement has everything to do with politics and little to do with reality.  Cutting funding for the poorest schools may make the base feel better and it may allow the Government to save some money but if you needed the best measure of need then poverty and the decile system is it.  And pouring money into a system that can be easily gamed while ignoring the clear need that exists is a recipe for continued failure.

41 comments on “Hekia has gone rogue ”