In parliament this week, Hekia Parata was asked who, if anyone, supports her plans regarding special education, and she replied with a smug grin that they are backed by the Special Education Association. It’s all there in Hansard:

Hon Hekia Parata: More seriously, I can tell the member that the Special Education Association tells me that they want to be able to measure progress, and that these tools offer that opportunity in looking at progress as well as outcome.

Hmm…. Special Education Association? Who are they, I thought.

I asked people who are very close to special education, like Giovani Tiso and Hilary Stace. Nope, they’d not heard of it either.

Others asked too. I tried Facebook. I tried Googling. I’m good at Googling. But nothing.

Oh wait – we tracked down a small group of people (like, 4-6 people, it seemed) at the University of Canterbury that might be the Special Needs Association! was this it? No. And anyway, that small band of merry folk are disbanding.

Was it the Special Educational Principals Association (SEPAnz?) No. Not them, either. 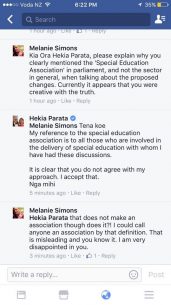 It turns out Hekia made the association up!

IT DOESN’T EVEN EXIST!

Seriously, she named this organisation in Parliament as backing her plans, and she now says it just means “all those involved in the delivery of special education” that she’s spoken with.

Utter and total tosh. The sector is dismayed by the proposals. Many are outraged. Parents are both angry and frightened.

By the way, when Melanie pointed out Hekia’s words were misleading, her post was deleted from Hekia’s Facebook page and Melanie was banned from it. This is common practice on that page, where only cheer-leading is allowed, not citizens asking reasonable questions. (My tip – screenshot everything).

Silence anyone that finds you out. What a wonderful, open democracy we live in. Tui.

Hekia Parata has stooped to a new low. She has lied. Openly and blatantly. I do hope the media and opposition MPs take this further. A Minister cannot and should not just make things up to pretend their plans have support.

(This post by Dianne Khan first appeared on the the excellent Save Our Schools NZ site.  Republished here with permission. Strident moderation will be exercised in the comments section – BLiP)