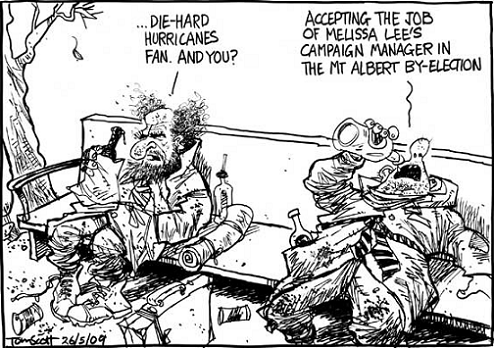 The irony is that Melissa Lee’s campaign manager, Mark Thomas, is no stranger to campaigns that start off with a hiss and a roar only to collapse when abandoned by National’s leadership.

Thomas was National’s candidate for Wellington Central in 1996, the first MMP election, in a three way contest with Act’s Richard Prebble and Labour’s Alick Shaw, the story of which is told in the documentary Campaign.

Things were looking good for Thomas, just as they were for Lee. In both races, the Labour candidate was losing votes to the Left (Shaw to the Alliance candidate, Shearer to Norman) and it looked like the Nat would would sneak through the middle to take a traditionally leftwing seat.

Then Jim Bolger, Thomas’s leader, went on Morning Report and said he thought Richard Prebble would win, effectively telling National voters to vote tactically to ensure Act got in. That was the end of any chance of winning Wellington Central for Thomas, just as any chance of his candidate winning Mt Albert went out the window when Key sideswiped them with the Waterview announcement. In a manner eerily reminiscent of how Key left Lee out to dry, Bolger didn’t even warn Thomas he was about to cut his campaign off at the knees.

It’s easy to imagine Thomas learning of the Waterview announcement and repeating his words after Bolger betrayed him: “fucking prick”.

[Ironically, it turned out Act didn’t need the seat to get into Parliament. They exceeded the 5% threshold easily. They were pretty happy about it too – Campaign captures their victory party with one Actiod saying “This is how the Nazis must have felt at Nuremberg”.]