This was originally posted on The Daily Blog last week.

Early last month there was a study published by Marcott et al with a reconstruction of the climate from available proxy data  since the last major glacial events which ended about 11,000 years ago. As the editor summary states at the AAAS’s Science Magazine

The pattern of temperatures shows a rise as the world emerged from the last deglaciation, warm conditions until the middle of the Holocene, and a cooling trend over the next 5000 years that culminated around 200 years ago in the Little Ice Age. Temperatures have risen steadily since then, leaving us now with a global temperature higher than those during 90% of the entire Holocene.

This warming after the last glaciation coincided and probably triggered the rise of the agricultural based culture that our civilisations are still highly dependent on today.

Since then, as can be seen in the chart from Jos Hagelaars which is a composite of 3 studies in different periods , the average world air temperatures haven’t varied that much – at least until recently. The AB12 line at the end of the chart is a rather optimistic* projection from the IPCC AR4 report projecting the coming century. Since the atmosphere and oceans together constitute a heat transfer mechanism called weather, and we are looking forward to a severe shift in climate, I’d anticipate that the agricultural foundation of our civilisation is going to have problems that it has never seen.

The average resolution of the data with a reasonable level of confidence on the Marcott study is only at about 120 years because much of the period relies on measurements taken from the debris and sediments left by the natural world. Each sample comes from long ago and typically has been churned by biological systems and erosion, and in any case reflects local climate conditions. So what is seen is for each point on the graph is a composite of samples across many locations and across decades rather than a year by year record.

It overlaps with the finer grained data from the past ~1500 years from Mann et al 2008 derived in part with from still living or fossilized trees and actual instrumentation after our ancestors started to use thermometers. And the expansion of the studies used to make up that is below that.

As usual, the great “skeptics” clobbering machine is in full swing on the Marcott study. dana1981 at Skeptical Science (a site that specialises in observing the breed) observes:-

The Marcott paper has been subjected to an immense amount of scrutiny, particularly in the climate contrarian blogosphere, with criticisms about everything from the wording of its press release to the timing of its Frequently Asked Questions (FAQ) publication.  Unfortunately climate contrarians have been so noisy in their generally invalid criticisms that the media has begun to echo them, for example in this Washington Post blog.

There was such unusual interest in the paper that Marcott et al that they put out a response in which  they explained some of the underlying science for the people unfamiliar with the techniques.

But as dana points out the difference between actual skepticism and the rubbish that many of the more pathetic scientifically illiterate climate skeptics like Ian Wishart practice.

If you want an example of real skepticism, look no further than Tamino’s Open Mind blog.  Tamino read the Marcott paper, noted they had expressed doubt about the robustness of the final uptick in their proxies, looked at the data, identified the proxy dropout issue, tried some new analyses, and found that the proxy uptick is probably real but probably smaller than it appears in the paper.  Also see similar efforts by Nick Stokes.  These are the approaches of real skeptics.  At least the manufactured controversy over the Marcott paper has served to show who the real skeptics and “honest brokers” are.

The irony is that the climate contrarians are being their own worst enemies here.  A ‘hockey stick’ shape means less past natural variability in the climate system, which suggests that climate is relatively stable.  It’s revealing that in their zealotry to deny that the current global warming could possibly be unnatural and unprecedented, the contrarians are actively trying to undermine their only potentially valid remaining argument against serious climate mitigation.

Nevertheless, all signs indicate that the current rate of warming is very rapid, probably unprecedented in the past 11,000 years; that if we’re not at the highest temperatures during that timeframe, we will be soon; and that despite the contrarians’ best efforts to argue otherwise, we’re not yet doomed to catastrophic climate change.

But Dana181 is an optimist about how resilient our civilisation is, especially in it’s agricultural underpinnings. It is pretty clear to anyone like myself has a background in earth sciences that the IPCC reports are conservative because they are limited to solid confirmed data. But we’re still severely limited in what we know about what affects climates past, present and future.

But what we can be sure of is that the weather will get a lot more variable and extreme as the energy in the ocean and atmosphere builds up. It could be that this happens slowly enough for farming to adjust. But when you look at the dependence of farmers in extreme climates around the world who are reliant on regular weather like the monsoons in Bangladesh or the mild winters in the gulf stream washed areas like Europe, it is clear how reliant we are for food on our relatively unchanging climate of the past 11,000 years.

I also found this great visualisation of the snow over europe in 2010 when the massive warming in the arctic pushed the cold jetstream down over europe. I’d expect that this sight in Northern Europe will become more common for some decades until the north gets somewhat warmer. More energy in the Arctic weather systems means that there is more energy to push cold air south. Eventually (quite some time away I hope) the same will happen in our South Island when the West Antarctic ice sheet starts breaking up and the extra energy in the south will forcing the southern jetstreams further north.

That is what climate change does – it shifts weather patterns as the atmosphere and oceans disperse the heat. 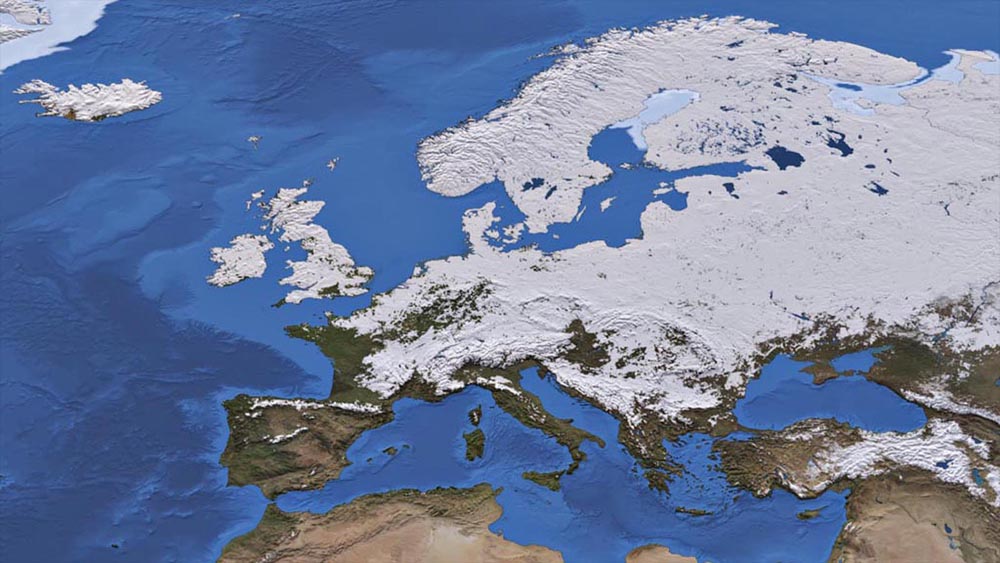 This image just illustrates how vulnerable Northern Europe is to climate fluctuations. As near as I can figure it out, the snowfall was almost exactly on the bounds of the last glaciation in that region.