… for her major contribution to my political education.

I lived in London during the entire time Thatcher was prime minister.  It was a time of major change;

of the restructuring of the workplace, the economy, society and popular culture;

of increasing extremes between rich and poor;

of the dismantling of the welfare state, of increasing poverty;

and for those on the left, sometimes there were times of fun, personal and political achievements and hope

– but, above all it was a time when the “neoliberal” right extended and consolidated its networks of power, influence, inhumane agenda, misleading PR, and political platform.  We continue to live with its legacy.

When I arrived in England in the late 70s, the left wing discourses were quite dominant in the media and in face-to-face-interactions.  The left seemed on the rise, and the future was there for the taking. It was part of the successful development of policies for a fairer world, with less poverty, more social justice and more opportunities for all to lead financially and socially secure, and fulfilling lives.

The left wing grassroots networks continue to operate strongly in opposition in the beginning of the 80s.  However, Thatcher set out to dismantle such socialist networks in the cities, and gradually, through a rafter of inter-related initiatives, they  were dismantled.

I recall the first New Year ’s Eve after Thatcher’s Tories were elected to government.  The snow was on the ground outside.  A group of us were sitting around despondently contemplating a future under (what we naively thought may be only one or two terms).  One of our group tried to positively energise us.  He argued that we should use the Tory time in power as an impetus for action and change.   However, over time I learned that successfully opposing the power of the elites needs more that earnest will and effort.

I remember that, in the early 80s, each time we went up to the centre of London, we saw the appalling sight of increasing numbers of people sleeping on the pavements, in doorways, and populating the Bull Ring under Waterloo Station and beside the National Film Theatre.  I recall the students (in my classes) and their families struggling to survive while the MSM touting the great British economic revival.  I remember going past burnt out cars, boarded up windows, and coach loads of waiting uniformed police in backstreets, and the helicopters buzzing overhead at night during the 1980s Brixton riots (I lived nearby). 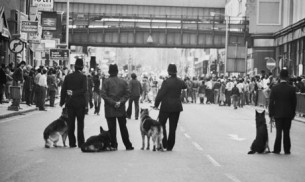 I remember the support from feminists, gays and other groups for the miners during their strikes; the day trips to tramp through the mud, and pee in the bushes at Greenham Common and being uplifted by the sight of the protests living in their makeshift camps. 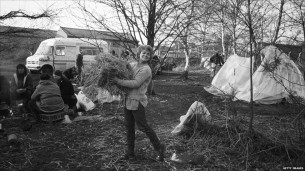 I remember the reports of IRA, bombings around London; the massive anti-Nazi League demonstrations and rallies (begun before Thatcher became PM); the industrial actions I participated in as part of the teachers unions, including leafleting in shopping centres, joining large demonstrations and rallies, work-to-rule periods; the poll tax riots, and the on-going opposition to Thatcher’s wars on the poor, waged on behalf of the elites.

But, above all, I remember, that no matter what the opposition groups tried – no matter how widespread the criticism of Thatcher and her government seemed to be on the ground, Thatcher kept on being elected again and again.  I remember the depths of my anger and frustration, and the way I came to see Thatcher as pure evil.

Thatcher and her government have left a long and deep legacy.  It continues to have an impact on life here in NZ, as well as in the UK.  The “neoliberal” revolution has done much lasting damage to many lives.  Nevertheless, in spite of the failure of “neoliberalism”, evident with the Global Financial crisis and its aftermath, it is a long time dying.

My memories of the time are diverse, personal and extensive. Ultimately, the main thing I learned from Thatcher is that action, political will, and policies based in sound evidence and humane values is not enough.  In order to work towards a more inclusive, fairer world without poverty and destructive divisions, there is a need to find a way to counter the extensive networks, power and reach of the “neoliberal” elites.