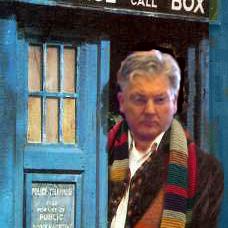 Woe betide those who attribute a single opinion to The Standard, I thought I’d offer a contrasting opinion with Marty.  I had to use his image though – I think the Dr Who look is priceless.

I like Income Splitting as a principle, but, as Marty has pointed out on more than one occasion, it tends to have bad outcomes in practice.  I don’t wish to fund tax cuts for the rich any more than he does.  The thought of Bill English deciding what needs to be cut to fund it terrifies me.

But I do think that the practice can be adjusted to fit the principle.

I like the principle because, in particular, I think it is very valuable having a parent home for the early years of childhood and, in general, it is good for people to be able to afford to do volunteer and community work.  Those not in paid work are often the glue that holds society together.  I don’t like the practice as those on $200k+ can fund their partner’s volunteering on their own shilling (or more likely on their employees’ shilling).

So how can we make the two fit?  The bill is coming (even if it may well not get to law), so we might as well see how it can be best shaped.

I suggest that the income that can be transferred from one tax bill to another be capped at the average income.  Partner earns $100k, and you earn $10k from your part-time job?  You can transfer it to $35k (average income) for you and $75k for them.  That way you’re not getting a better than average deal, and the tax savings are focussed on those earning less.

My other suggestion comes from Policy Progress: tie the increased cost to a tax on incomes over $100k.  Aotearoa’s tax rates for those earning over $100k are the lowest amongst rich countries, there’s plenty of room to move.

(Hat-tip Trevor Mallard for the policy progress link; and whilst we’re there, yes, you were first to break the Heather Roy story.  Enough kudos for you?)

If one needs to reduce the cost further (and I’d suggest that’s only if it’s not funded from an increased $100k+ tax rate), then focus it where it’s really helpful: on those with school age or younger children.