I’d characterise incrementalists as people who acknowledge the science and seriousness of global warming, but who maintain it’s possible to use capitalism as a way to counter it. In that vein, we’re talking about such things as getting the right price on carbon, building ‘green’ infrastructure and ‘green’ growth, developing ‘utopian’ technology (eg Bio-Energy Carbon Storage and Capture) and whatever. But we’re most certainly not talking of asking any fundamental questions about the socio-economic paradigms that have shaped and that continue to shape the world we live in.

‘Bricking it’ is when you shit your pants with fear btw. I don’t know if it’s a Kiwi expression, so I’m just explaining for the sake of any who may be unfamiliar with it.

Here’s a newspaper report on what Christiana Figueres and her colleagues published, and here’s the full length piece in ‘Nature’.

It’s an upbeat piece in spite of the header.

It offers up six milestones for where “the world needs to be” by 2020. The measures relate to goals within the sectors of energy, infrastructure, transport, land, industry and finance.

By way of analogy, I’d characterise the whole piece as – If we keep on running optimistically down the rail track we’ll not get collected by the train and being out of puff means we’re getting somewhere.

It’s basically a thoroughly misleading piece that rests on very dubious and downright dishonest interpretations of data and science. Given the influence that Figueres and her colleagues no doubt have (noticed the sudden enthusiasm by some governments for banning cars in the coming decades?) it’s downright dangerous.

There isn’t space here to unpack the entire piece and so I’ll only mention a few things.

Perhaps most obviously, there is the notion that CO2 emissions can be brought down to zero. This is the graph used in the Nature piece… 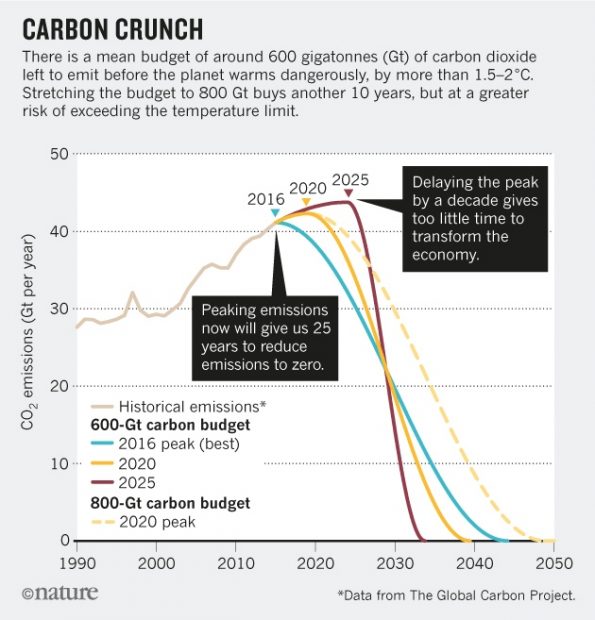 That’ graph, and therefor any conclusion being drawn from it, is a nonsense. Aside from anything else, there is absolutely no way to achieve zero emissions. There is a ‘floor’ made up of releases from agricultural and other land uses. These can be minimised, but not eradicated.

Then there’s the explanation of carbon budgets implying they are ‘hard set’ and that ‘x’ amount of carbon = ‘y’ degrees of warming – ie – “the maximum amount of the gas that can be released before the temperature limit is breached.” So that’s nice. We’ll be okay until such times as that maximum amount of gas for any given resultant temperature increase is released. Unfortunately that’s bullshit.

Temperature increases are linked to amounts of atmospheric carbon and according to different assumptions around climate sensitivity. If we can say with scientific certainty that the budget for 1.5 degrees or 1 degree is gone, then that doesn’t mean warming will be 1.6 degrees or 1.1 degree. It means the chances for warming remaining below 2 degrees, 3 degrees or even 4 degrees have become slimmer – ie, the odds have shortened, and you can place your bets on whether or not we’re there yet. If that’s your thing. (A longer explanation here if required)

Drilling down into the piece just a little, we come across a lot of absolute smash like the following –

In 2016, two-thirds of China’s 5.4% extra demand for electricity was supplied by carbon-free energy resources, mostly hydropower and wind. In the European Union, wind and solar made up more than three-quarters of new energy capacity installed; coal demand was reduced by 10%. In the United States, almost two-thirds of the electricity-generating capacity installed by utility companies was based on renewables.

Okay. Here’s a graph for global energy use that puts that upbeat “2/3rds of 5.4%”, “3/4rs of new energy capacity”, 10% reduction in coal demand” and “2/3rds of new electricity-generating capacity” into perspective. Note the growth in oil and gas that’s outstripping the growth in ‘other renewables’ (smaller percentage increase, but from far higher numbers)? Essentially, total energy demand is growing and oil and gas is replacing coal and fueling most of that growth.

Look, I claimed in the header for this post that these people have ‘bricked it’. Of course, it could be that they’ve twisted and warped oodles of stuff they ought to be familiar with because they’re very, very stupid, and not because they’re simply scared and completely out of ideas about what to do with the information they have at hand. But remember the wizard from the Wizard of Oz and how he hid behind a curtain? Well, I’m thinking the world’s leaders are crowding out his cubby hole.

Anyway, finally and on a bit of a personal note – this is for those who will inevitably and boringly accuse me of just ‘using’ global warming to peddle an anti-capitalist message; of just wanting to ‘burn it all to the ground’ as it were. If that was what I wanted, then I’d be out there utilising fossil for all I was worth in whatever direct or indirect way I could. Because that most certainly ends very badly for capitalism. (Yup, and much else besides. But hey! Omelettes and eggs and all of that.)

11 comments on “Incrementalists ‘Brick It’ ”