Is anyone ABC any more?

It’s fine not to agree with someone’s politics. It’s fine to weigh up the attributes of one prospective leader against another and decide that one is the better choice. But the Anyone But Cunliffe clique didn’t do that. They literally wanted anyone who wasn’t Cunliffe. When Parker wasn’t going to win, they went to Shearer. It was a childish way to play with the future of a political institution that they don’t own, but inherited from those who came before them and hold in trust.

Because the ABC-er’s opposition to Cunliffe was personal, not political, they didn’t try to debate the issues but launched smears, instead. Rather than have an honest, respectable debate, they told lies. They were trying it as late as August when an abortive move was made to take Cunliffe out of play before Robertson rolled Shearer. That strategy has only hurt Labour, making it look petty and divided. But, an ABC position clearly isn’t putting Labour first. It is and always was illogical to say that anyone was better for the party than Cunliffe. 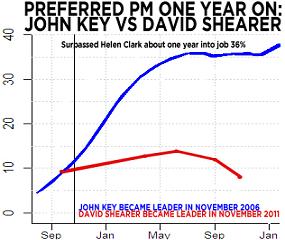 So, are the ABC-ers still out there? Has that been a good ploy for the party and the country? What do they think of themselves now?

I know there’s at least a rump still talking filth about Cunliffe rather than talking about rebuilding Labour.

Think about that: when the Nats are incredibly exposed on the economy, the rump ABC crowd would rather attack the Left’s most articulate economic communicator then join him in getting on with the job. It’s a shame that those people would rather spend their time stabbing their allies in the back when the enemy is over there, on the other side of the aisle, wounded and just begging to be beaten.

So, there are still a few ABC-ers out there, but is anyone listening to them and their self-centred murmurings any more?

lprent: The graph was apparently lifted from whaleoil’s post (he is whining about it). I’m sure that Eddie would have acknowledged it (or avoided it) if he’d known the source.