“Is there even a point in having the Greens anymore?”

Well yes Martyn, there is. Last time I looked the Greens were still needed for Labour to be leading our centre/left government.

So let’s count up what the Greens have managed to get here.

That’s $4billion out of a budget of $50billion?

More maths. Funnily enough, $4b is 8% of $50b, so it looks to me like the Greens, on 6.27% of the vote, are punching above their weight. Not that the Greens actually punch in politics, because what’s the point of punching your allies, the ones that you need in order to have any power?

And not that this is the most meaningful way to assess the value of a political party, but here we are. If we’re going to talk using crayons, this is the chunky strokes picture of where we are at: the Green Party enables a centre/left government, and they get more gains than their size would otherwise indicate.

For those interested in the details of what the Greens did for this Budget, here’s a post that explains what we wouldn’t have had if the Greens didn’t exist. That’s a point for the people who think Labour can/should govern alone, or with NZF alone.

Martyn seems to think the Greens should be climbing Mt Everest. I’d much rather they were down on the plains doing some regenag farming. That’s the difference between macho left wing politics and green politics right there, the desire for heroes and warriors vs the need to rebuild and create.

My thanks to Psycho Milt in the comments for this,

Here we go again. Commentators ask what use are the Greens if they aren’t dominating the government’s policy agenda? They never explain how they think a party with 6% of the vote might dominate the agenda, nor explain how discouraging people from voting Green will help the Greens get more influence over policy and spending.

So it’s a stupid question to start with, but if you’re determined to establish what effect the Greens have had on this budget, compare it with the Clark government’s 2002 – 2008 budgets. Those are what we could expect if the Greens weren’t involved.

I never see the how or the rationale explained either*. Maybe there is some special magic wand that macho politics controls, but it’s a well hidden, secret magic wand that no-one seems keen on sharing.

Here’s my challenge to lefties in this election year. If you think the Greens can do better, say how. Specifically. We all have our reckons about what should be, but tell us how those things can be. Bring your good ideas to the table, not just the fantasy, but the plan on how to get there.

Here’s one. It’s really simple. The Greens can have more policy influence on government with more Green MPs in government. Fifteen Green MPs instead of eight would change things like presence in the public eye, MSM coverage, Ministerial positions, resources within caucus and parliament, positions on Select Committees. All of these affect power in parliament (i.e. which shit gets done), but equally important is the increased ability to shift culture, long the secret weapon of the Green Party, to more egalitarian and progressive values.

Voting Green and supporting the Green Party makes a difference. If that seems ethically troublesome for some lefties, or a poor cultural fit, maybe consider what it would be like voting in the US this year and see if that sharpens the mind. If party politics is really too much, put energy into extra-parliamentary movements, there are plenty to choose from. All good change comes from the edge, and we still need parliament to enact that, so vote Green as well.

Some of what should happen this year is squarely on the Greens. The decisions they make as a party and caucus, what their social media team does, how they manage the MSM, their election campaign and so on. There’s important critique to be made here, but it’s time to get past the superficial Green-bashing for the sake of it and instead offer up something that takes us somewhere better than we are.

There is also what the rest of us do. How we vote, how we talk about politics and this election, how we support each other and our natural allies, how we critique rather than bash, how we build and give mana, how we front-foot our values and create change. 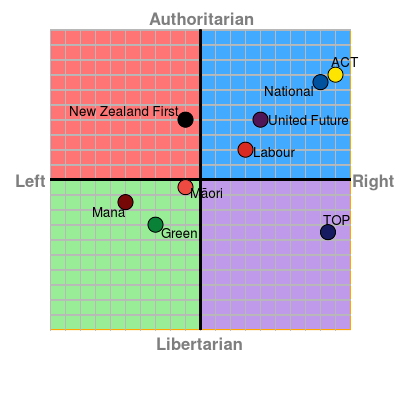 *to be fair Bradbury did suggest that having one of your media team become chief press secretary for Labour was a useful way to make policy gains. Neat.

104 comments on ““Is there even a point in having the Greens anymore?” ”