Prime Minister John Key is the worst enemy New Zealand’s natural heritage has had in decades. Not content with the destruction caused by mining our most precious conservation areas, Key is pushing to sell off access to the conservation estate to the highest bidders. And to top it all off his Energy Minister Gerry Brownlee is still intent on bulldozing a road through the heart of Fiordland. 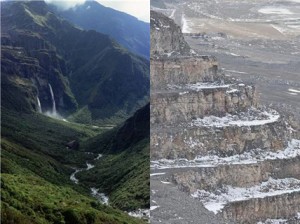 dness that I see John Key’s government ascribe a dollar value to our conservation and heritage areas – some of the most beautiful and amazing places on the planet. Behind it all nothing more than an intent to cuddle up to a few resort owners and wealthy developers.

Well I don’t think Kiwis will let this one stand Mr Key.

Your attack on our conservation estate is an attack on the heritage of all New Zealanders. From Aucklanders to Southlanders, we all love these special places. And no, you can’t value them like exchange rates during your currency trading days.

As former PM Helen Clark said, echoing the values of our political leaders have upheld for decades:

“I can think of plenty of things [that have been hard to watch], but that is core value.”

Allowing mining in a national park went against every thing she stood for. “National parks are for future generations, preserving ecosystems. Some things you have to put above money.”

Our conservation areas and natural heritage are priceless and cannot be out-valued by a mine, a road, or a quick buck. Pick your battles wisely Mr Key, because you’ll lose this one.