John Key’s Lies Since The 2014 Election 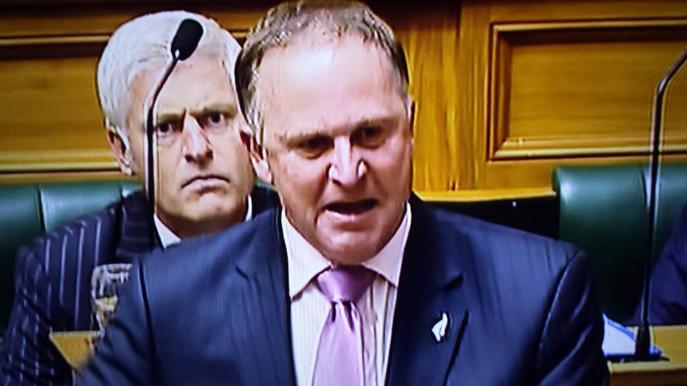 He’s been a busy lad, that John Key. Lying pretty much non-stop during the 2014 election campaign with his “left wing conspiracy” mantra, he’s slowed down a bit since polling day on 20 September, settling into a more sedate but steady pace. Stretching from the very serious to the utterly ridiculous, his recent lies cover a wide selection of topics ranging from the Independent Republic of Northland to the urgent need for new terrorism laws.

The prime ministerial cascade of mendacity was made all the more apparent by the orchestrated attempt of some of his senior ministers late last year to foster the meme that John Key was “the most transparent Prime Minister New Zealand has ever had”. Sure, he’s transparent alright, but not in the way they were suggesting. Their tactic was a direct copy of the meme-injection by Barrack Obama’s crew but, surprise surprise, it didn’t really take hold here. Part of the problem was how every time the phrase was used, say, half a dozen times, John Key told another lie. The lies which killed off the meme quickest were those concerning his on-again off-again bromance with Cameron Slater. The Prime Ministerial performance-art perfidy over his admissions, then denials, about National Ltd™’s handling of OIA requests didn’t help either.

Among the more serious lies were those involved in the softening up of the public prior to his compliance with Barrack Obama’s instructions to send Kiwi troops to the Middle East slaughter-fest.  The utter contempt shown to New Zealanders regarding the “rolling-maul” GCSB spying issue and involving his calculated use of malicious lies to smear messengers of inconvenient truth has been unforgivable. John Key’s contempt extends also into Parliament. His point blank denial of his government’s own figures concerning the level of emissions into the environment is a good example of this. Ably assisted with typical partisan and belligerent air-cover from The Speaker, it was a breeze for the Prime Minister to mislead The House. Again.  Of note, his promise to resign if it is found that the GCSB carries out mass surveillance was only exposed recently but actually goes back to August 20, 2013 so isn’t included in this update.

The most egregious aspect is not so much any specific lie but, rather, the sheer banality of the now firmly embedded practise of lying. Because most National Ltd™ voters really don’t care that they are lied to by their Prime Minister and because the MSM is something of a fellow-traveler in the land of  deceit, John Key has been able to get away with it largely unscathed for more than six years. Disappointingly, several of the young and impressionable National Ltd™ Ministers have aspired to his propensity for prevarication.  The result is that now, in his third term, John Key has effectively surrounded himself with a posse of adoring and sniggering enablers. Simon Bridges is a good example, but still something of an amateur. His attempts to cover for John Key in the House yesterday lacked his master’s diligence, the performance even raising the ire of the usually benevolent Speaker. Bridges eventually faltered into his more innate  privileged prat petulance.  Bridges is a trier, though, so he’ll get there. I reckon it will be the likes of him and his cozening cohort which will be John Key’s eventual legacy to Parliament.

After a while, collectors of John Key’s lies do tend to become somewhat inured and can’t be blamed for opting every now and then to laugh rather than cry. High on the lulz-scale for pure crazy was the lie that the Greens are responsible for the rise in income inequality in New Zealand. Then there was the one about how Labour’s approach to dealing with Treaty issues would lead to Northland becoming an independent republic. John Key’s understanding of Treaty issues was further highlighted with his statement that New Zealand was one of the very few countries in the world to have been peacefully settled.  Most hilarious, because of his manufactured reputation as some great financial whizz kid, was the one about how much GST was payable on a $1.29 item. Working out percentages is obviously not John Key’s forte, which is why, I guess, Nigel Morrison loves him so much.

Anyhow, here’s John Key’s List Of Lies since the 2014 election. I’m sure there’s a few missing and probably a few more still to come to light for this period. As always, any checking of links and/or refutations and/or suggested additions are more than welcome.