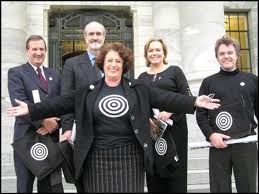 A recent tweet by Matthew Hooton claiming that Judith Tizard is getting a position in David Cunliffe’s office was obviously meant to be destabilising spin.  There was a quick response that Judith was merely helping out an old friend by helping him move his office.  But Hooton’s tweet made me reflect on Judith’s treatment over the past few years.

Because Judith’s treatment by the media and the forces of evil was unwarranted and frankly appalling.

She is from very solid Labour Party stock.  Her father Bob was a high ranking member of the Labour Caucus for many years.  Her mother Kath was the first Labour mayor of Auckland.  Within that family is a huge history of dedication to the party.

My own impression of Judith’s contribution as a Minister in the fifth Labour Government, and it is an impression formed by considerable exposure to her work, is that it was significant.

As Associate Minister of Transport Judith was at the forefront of Auckland based projects.  When you think of the revitalisation of the rail system, the tidying up of Spaghetti Junction and the progress in completing the Western Ring Route these were significant projects that required deft handling which Judith provided.

And as the Associate Minister of the Arts I witnessed Judith give some stunning speeches highlighting the important role the creative sector plays.  The ongoing loyalty of the artistic classes including musos to Labour is a reflection not only of their appreciation of Helen Clark’s work but also of Judith’s work.

Judith did lose the seat of Auckland Central in the 2008 election.  She was struggling with her health at the time and was lacking energy.  And the seat is not a safe Labour seat.  The rising gentrification of the area has seen to that.

She was mercilessly attacked by the right and made a figure of mockery.  But these attacks were unfair.  When we tolerate this type of behaviour on one of our own then none of us are safe.

The “Judith Tizard phenomenon” was said to be a factor in the decision on who Labour’s candidate for the Mt Albert by election was going to be.  It seems that some within the party had bought into the right wing spin.

We need to be more protective of our own and more appreciative of their work.  And we need to counter the obvious attack lines that the Right throw up from time to time.

UPDATE:  Matthew Hooton has pointed out that I have Cath Tizard’s name spelt incorrectly and he is right.  I prefer not to use her title as my fierce republican nature refuses to recognise its relevance.  He is correct that any of us engaging in social media ought to make sure that we are as accurate as possible 😈

125 comments on “About Judith Tizard ”