Keith Ng’s recent post at Public Address is so good I have to reproduce the whole thing here. Keith – tried to get in touch via your contact web form, hope it is OK, if not let us know, thanks. — r0b

Did you know we’re in a recession?

Dear Bill English. Let’s make a deal. I won’t do something stupid, like blame National for the recession, if you don’t do something stupid, like try to claim that all the side-effects of the recession are actually good things that National can take credit for.
—
Bullshit #1: “The lowest annual inflation rate in more than six years confirms that cost of living increases have generally been low… price increases [are] significantly lower across the board under National” – English

I can’t believe that National is trying to claim credit for low inflation.

1) It’s the Reserve Bank’s job to control inflation. If anyone should be taking credit, it’s Alan Bollard, not Bill English.

3) If English really wants to stake his government’s reputation on keeping down prices, he’ll need to resign in exactly three months, when the impact of GST flows through to the inflation statistics and they go through the roof.
—
Bullshit #2: “Real after tax average earnings in New Zealand have increased 8.7 per cent since September 2008 – a significant improvement on the 3 per cent total growth over the previous nine years.” – English, in August

“[English] released figures which he claimed showed real after-tax wages had risen under National (from minus 1 per cent from December 2006 to September 2008, to 9 per cent in September 2008 to June 2010).” – English, in October

Come on. A little more common sense and a little less LSD please.

Why do the numbers look like this? Because English used the average wage for employed workers. During the Clark years, policies like WFF brought more people into the lower end of the workforce. This bought the average down. The people who were already in the workforce didn’t get any poorer – the only thing that actually went down was the average.

When the recession hit, people got laid off, or got bumped down to part-time. Because the low earners tend to get laid off first, when they got taken off the books, this perversely made the average go *up*.

This shows the number of full-time equivalent employees (e.g. Two half-time employees count as one). The last two years saw the biggest dip in employment since Ruth Richardson. 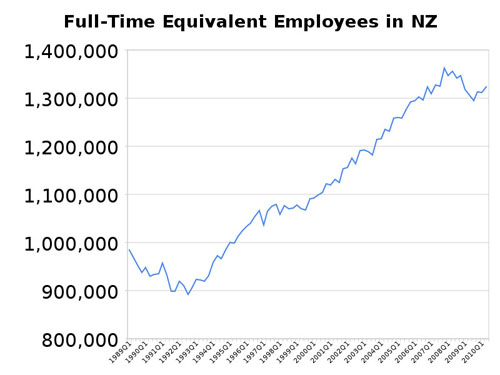 A lot of people became unemployed, or less employed. The only thing this bumped up was the average – it didn’t actually make the people who were still employed any richer. This is what happens in a recession. This is what Bill English is taking credit for.

The real statistics on income comes from (duh!) the New Zealand Income Survey. This shows the median weekly pre-tax income. No prizes for spotting the trend here – these have been the worse two years for income since the survey started. This is what happens in a recession. 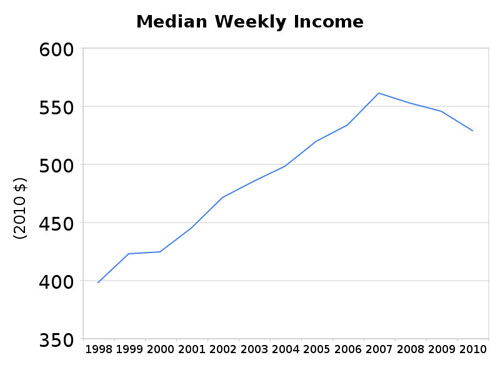 So far, I’ve only looked at pre-tax figures. English’s numbers are after tax. How can that be, when National’s tax cuts just started this month? Oh. Turns out English was measuring the effect of Labour’s 2008 tax cuts and National’s April 2009 tax cuts, but doesn’t include the one that has just come into force. 70% of the tax difference came from Labour’s tax cut, and 30% from National’s. So, English is trying to take credit for *that* as well.

This stuff isn’t National’s fault. There was a global recession. People lose their jobs, income takes a hit, consumption slows down. It’s what happens. But all this stuff about how we’ve suddenly become better off because it’s a National government is just a lie. Nothing magically happened when John Key took office.

44 comments on “Keith Ng: Nat bullshit on inflation and earnings ”