Key needs to get real on Fonterra crisis

The Fonterra fiasco is turning into a genuine crisis and a huge risk to our economy. The latest this morning:

Fonterra has been forced to defend its brand once again amid fresh claims milk powder from the company, being sold in Sri Lanka, had been contaminated with radioactive chemicals.

Fonterra today said two batches of Anchor-branded milk powder had been recalled this week under orders from the Sri Lankan government after reports it may have contained traces of the toxic agricultural substance dicyandiamide (DCD). …

Key’s response has been weak and political. Of overseas critics “They are often people who have an agenda…”. Of critics in general, they are “mischief makers”. It’s his usual bullshit politics, and China isn’t buying it:

As New Zealanders move on from Fonterra’s botulism food safety fiasco, disillusioned Chinese people are cancelling their plane tickets to this country.

While Kiwis’ faith in Fonterra is bruised, China’s trust in New Zealand is shattered, say experts in the culture of our biggest export customer.

“People have cancelled visits to New Zealand because it is not 100 per cent pure,” says Massey University associate professor of marketing Henry Chung, who has studied the Chinese market for more than 20 years.

“After this event, the Chinese consumer and the (Chinese) government cannot tolerate any more. If anything happens again, any explanation will be considered redundant.

Mahon says: “New Zealand has been trusted more than nearly every other OECD country. We were in a special category and have been viewed that way since 1949 (the year of the communist revolution).”

“There is an unbroken relationship of trust that New Zealand was different. In the space of 12 months we have managed to unravel that. ”  …

“Every time a product goes out, we need to make sure it is high quality because in the end they [China] don’t view Fonterra as Fonterra, they view it as the whole country.

“One tiny thing can ruin the whole country’s image.”

This is a huge risk to our economy, and politics aside John Key needs to wake the hell up and fix it. Further dismantling environmental protections is the wrong and stupid thing to do – it is “economic sabotage” indeed. Time to get serious about environmental protection and the safe regulation of our exports. Or it could all come crashing down. 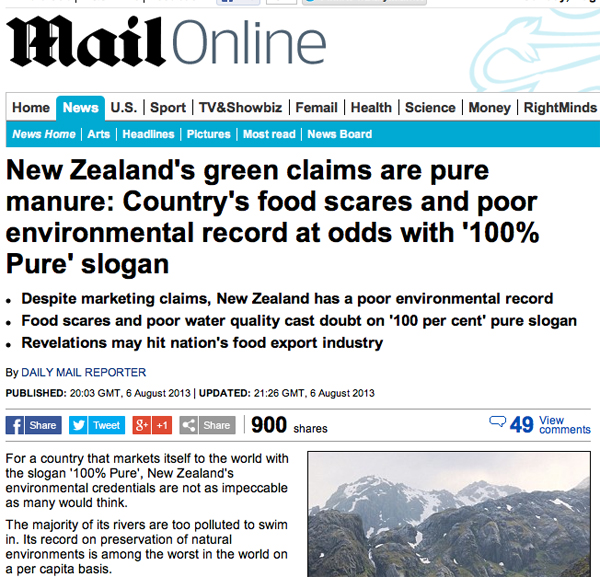 128 comments on “Key needs to get real on Fonterra crisis ”