Key’s flip-flops for sale on TradeMe 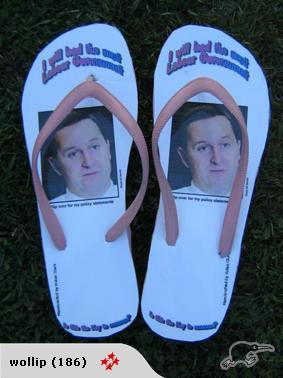 These won’t be comfortable to wear or even be long-lasting but they do come with an interesting provenance. They are size 8.

It has been claimed they were recovered from a rubbish bag collected from Parliament Buildings.

Inquiries indicated that a practical jokester on National’s front bench carefully constructed them as a birthday present for Opposition Leader John Key. (When approached Gerry Brownlee denied any knowledge and suggested trying Maurice Williamson who said he was aware of them but he wasn’t involved!) When a senior party member suggested that the gift was entirely inappropriate and that they were likely to fall into the wrong hands the jandals were quietly disposed of.

Under the photo of John Key it says “Flip over for my policy statements” (These are very revealing!)

And at the heel it asks ” Is this the Key to success?