Labour and the Greens on welfare 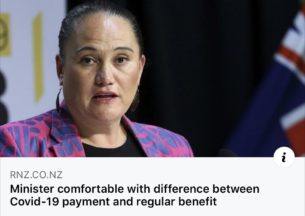 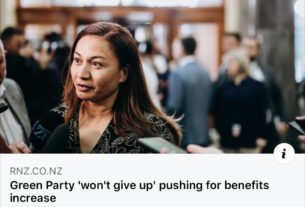 The Greens have accused Labour of breaking a core promise to overhaul the welfare system, a commitment made in 2017 during negotiations to form a government.

Full-time workers can apply for $490 a week – roughly double the regular Jobseeker Support.

Green Party co-leader Marama Davidson told RNZ the new offering was a “very clear” admission that base benefit rates were not enough to live on.

“Everybody should be able to access the support, regardless of whether they are recently unemployed or longer-term unemployed.”

Davidson said she had heard the frustration of beneficiaries who felt they had been deemed the “undeserving poor” by the latest move.

The Greens had pushed for all benefits to be increased to the new Covid-19 level, she said, but had so far been unsuccessful in getting that over the line.

“We’ve been consistently clear that this needs to happen urgently and desperately. It hasn’t happened yet, but we won’t give up,” Davidson said.

“Both New Zealand First and Labour need to come to the table on this.”

The need for an increased payment higher than current benefit for those becoming #unemployed during #COVID__19 shows that current weekly payments aren’t enough to live on. #COVID hasn’t changed this fact, it’s just highlighting it as more people are seeking support.

However, it draws attention to the unfair approach applied to other #benefits, particularly for those with long term health needs and #disabilities.

Further work on #welfare adequacy needs to be a priority, to ensure a fair and resilient system for both changes in personal circumstances and wider economic shocks.

You know what would change all this? The Greens having enough of the party vote in September so that they can make welfare a bottom line for a coalition agreement*, including Davidson holding the Social Development portfolio. Carmel Sepuloni and Labour appear wedded to a neoliberal view of welfare as a necessary evil that paid jobs will solve, rather than social security being the basis of dignity and fairness, kindness and wellbeing for all of society. It’s very clear now that despite occasional, vague hints at change Labour have no intention of mending WINZ or welfare generally, so let’s put people in charge that will.

For those that still think the Greens don’t have anything to bring to the table, have a read of their new Income Support policy (ratified February 2020). Not just the synopsis page, but click through to the full policy (PDF). It’s not perfect, but this is the solid framework for redesigning welfare that both centres people and is fit for going into an uncertain future.

* The Green Party kaupapa is that social justice and the environment go hand in hand, it’s not an either/or.

79 comments on “Labour and the Greens on welfare ”