Labour Greens joint State of the Nation livestream and discussion

The speeches are livestreaming from 2pm on the Labour and Greens Facebook pages.

Green Party Co-leader Metiria Turei and Labour Leader Andrew Little will speak about their priorities for the year, and will discuss the social and economic challenges and opportunities facing the country and present a vision of the stable, responsible, alternative the parties will offer New Zealand. 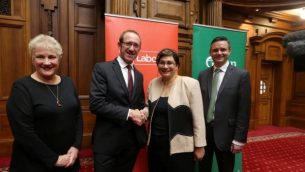 The Mt Albert War Memorial is overflowing with many turned away. Good atmosphere 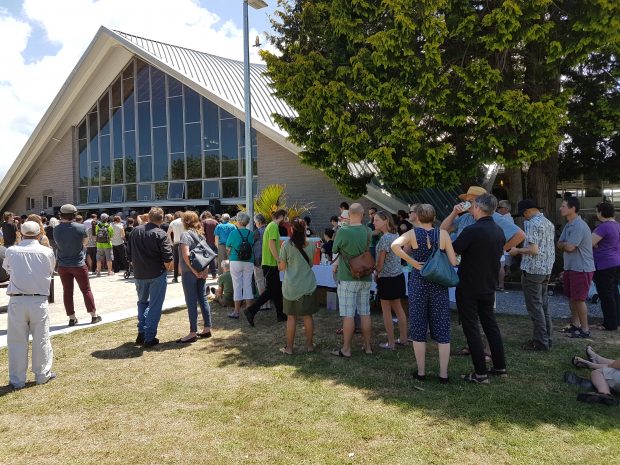 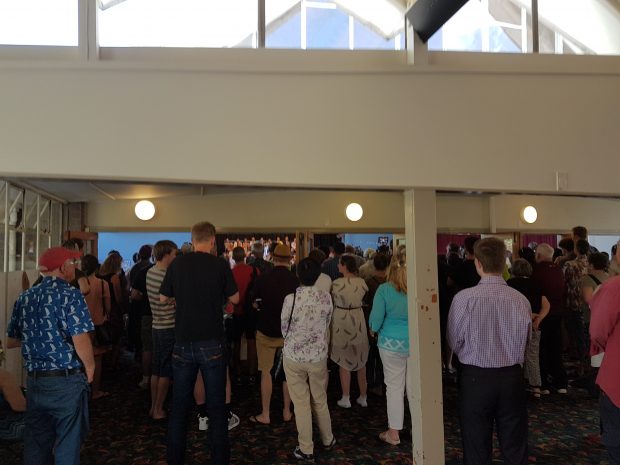 However in the sign of the times, I had to leave to drop these pictures back home and to watch it on a stream. Spark’s internet data on cellphones and much of the rest of their network is still in a shambles at 1430.

The speeches are good and clear.

Welcome, everyone, to our first ever joint State of the Nation speech! Tena korua, Andrew and Annette, and our Greens and Labour family.

It’s wonderful to see every single one of you here. I want to talk to you today about one of my greatest inspirations – Mana Wahine.

Mana wahine, fierce women, women who stand up for what they believe in, who protect and care for our people, for our rights, for our planet; my mother and my daughter, it is the fierce women, the mana wahine in this room who inspire and motivate me and James, and all of us in the Green Party.

When I became a mum, holding my baby daughter, I realised the work of Niniwa i te Rangi, Kate Sheppard and all those fierce women who had gone before, was a long way from finished.

And it’s the Aotearoa New Zealand that we are all working to create.

Because we live in a country where too many live in substandard homes – or no home at all. Where many have no jobs, or are stuck in low wage jobs.

Where 150,000 kids miss out on milk, meat, and veges. Where third world diseases are rampant – we have chronic lung disease at 7 times the average of most other developed countries.

It’s a New Zealand where our rivers, our lakes and beaches aren’t clean enough to swim in, where some can’t trust the water that comes out of the tap. Where the government won’t stop or even prepare for climate change.

That is not the Aotearoa we want.

To change that we must keep working together to strengthen women’s voices, in families, in communities, in work, and in politics. To support amazing young women like Julie Anne Genter and Jacinda Adern.

We must keep building and using our political power.

Today I honour two fierce women who did exactly that. They stood up for what they believed in, wore their values as a badge of honour and who, in their different ways, still lead us.

The daughter of two fierce campaigners for social justice, Helen’s early life was steeped in the most important causes of her time – the peace movement, education and, of course, workers’ rights.

She was fierce, she was loyal and she was effective. She never shied away from a fight. And she had a kind word for everybody. Well, almost everybody.

2016 was a difficult year for many reasons, and losing Helen Kelly was one its biggest blows. He mihi aroha ki a koutou katoa, te whanau Labour. We in the Greens understand well the extent of your loss.

It was no surprise that Helen kept fighting for causes close to her heart in her final weeks. She was steadfast in demanding safety for forestry workers, for the return to the Pike River families of their loved ones. And I will always love her for standing up for those who are sick and deserve compassion, not the long arm of the law.

And it’s because Helen knew her values. She lived her values. And she stood by them, even when the cause was unpopular. Even when her opponents were influential businessmen who had the Government’s ear. Even when others were saying ‘there’s nothing more we can do here’.

Helen was a relentless advocate for working people. She believed that no matter what you did to earn a living, you deserved respect, good working conditions and fair pay. You deserved to come home safe from your job to your families every day. For Helen, it was values that mattered, that drove her to act. You never needed ask whose side Helen was on.

Another woman still working every day for what she believes in is Jeanette Fitzsimons.

When she entered Parliament in 1996, she called out our country’s politicians for their neglect of the environment; whether it was GE, climate change or against an economy that demands the environment bears the cost of its pollution.

It’s hard to put it better than Jeanette did when she said “just because New Zealand is travelling first class on this planet does not mean that the ship is not sinking”. She has not always made herself popular for challenging the myth of New Zealand’s clean, green image.

But Jeanette was and still is, fiercely determined to hold polluters and complicit government to account. Just last week, she and other grandmas chained themselves to Fonterra’s fence because they are still using coal.

You never need to ask whose side Jeanette is on.

The Green Party continues this work – we put environmental issues on the agenda 25 years ago – as we do today. We know how important a restored and thriving environment is to our community and to our economy.

Helen and Jeanette were and are motivated by compassion and love for others and our planet. As a result, they achieved so much, although the odds were against them. They were unafraid to be disliked in the pursuit of truly meaningful change.

When we look back on Helen Kelly and look to Jeanette Fitzsimmons now, we know that they fought for us. Helen never stopped fighting. Jeanette hasn’t stopped. And neither will we.

Standing up for the values you believe in is the true measure of leadership, even when it’s hard. Especially when it’s hard. If you bend your values in times like these, then what are they worth?

Some of you might remember when your Labour and Green women MPs refused to be silenced when National Party men used rape as a political weapon. We walked out of Parliament and straight into your arms. You told us that we had walked out for you, spoken out for you, stood up for you against an insidious rape culture. For each of us it was the very personal made political and it was hard.

I want to thank every one of those Green and Labour women MPs today. That was a moment when our parties stood together and stood up for our values.

Our Green values of upholding Te Tiriti o Waitangi, ecological wisdom, social justice, democracy and peace are values New Zealanders share with us. These values drive all our political work.

Granted, it’s not always easy. There are few easy solutions in politics.

But when you can’t rely on your Minister of Women’s Affairs to stand up on behalf of women who are victims of sexual assault, who can you rely on? If the Minister for the Environment won’t stand up for healthy, swimmable rivers, lakes and beaches, then who will? If the Minister for Social Development won’t apologise to vulnerable children who were abused in state care, then who will?

What we have learned from National in the past nine years is that they might do what is easy, but they won’t do what is right.

The Green Party will do what’s right, even when it’s not easy.

We have the skills, knowledge and values to help shape Aotearoa; to make our great little country even better. To address the most urgent issues affecting families. To create a modern New Zealand economy where we all thrive, not just the privileged few.

That’s what we – myself, James, Andrew and Annette are going after in 2017. That’s why the Greens and Labour have signed the Memorandum of Understanding.

To see our parties, the Greens and Labour working together to deliver for our children, our communities, our environment.

So, let’s all make this commitment together:

We will have rivers, lakes and beaches we can swim in and safe water to drink. We will value parenting. We will have fair wages and decent incomes, where everyone will have enough to put a roof over their children’s head and food on the table. We will uphold Te Tiriti o Waitangi. We will definitely have better, warmer, and more affordable housing.

We will end the scourge of homelessness that is this country’s great shame.

By Helen Kelly and Jeanette Fitzsimons.

By the mana wahine who fight for indigenous rights here and around the world. By the women who marched for equality and human rights. By solo mums and working mums. By the women, like Jeanette, who put their bodies on the front line to defend our environment.

I am inspired. By all of you.

My commitment to them, to you, is that you will be my inspiration when the Green Party and the Labour Party form a new Government in 2017.