Today Key is giving a major speech on the economy. He told Oliver Driver on Sunrise yesterday that it would be “pretty high level”, and he wasn’t joking. 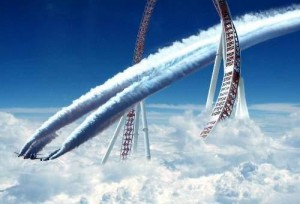 The Sir Peter Blake Awesome Stratosphere Rollercoaster will rise from Queen’s Wharf, circle the Sky tower, rise to a height of 1500m, and do a twisting loop before plunging back to the start. According to papers Key will distribute at his speech, it will be “the largest, hightiest, choicest rollercoaster in the world”.

According to speech notes, Key hopes it will be finished in time to add some “real buzz” to the Rugby World Cup’s “party central” at Queens Wharf, an exposed, outdoor venue, where tourists will apparently want to hang out in the middle of winter.

In the speech, Key concedes “no official costing, cost-benefit ratio or even basic engineering work has been overtly done on the proposal” but he has “a sunny, optimistic and sunny outlook about this project and so should you be”.

The Prime Minister claims the project will create “a gajillion jobs” and bring in “tonnes and heaps of tourists”. He estimates the project will cost “about a couple of hundred grand” based on the cost of a similar project he constructed the other afternoon playing Rollercoaster Tycoon on his office computer.

John Armstrong and Fran O’Sullivan have been given a sneak-peek of the project and will run pieces this morning. Armstrong will report the project has ‘seized the imagination of all New Zealanders, even the ones I haven’t had a chance to ask yet’. O’Sullivan will be more circumspect, backing the project only as long as Key also sells Solid Energy to the Chinese.