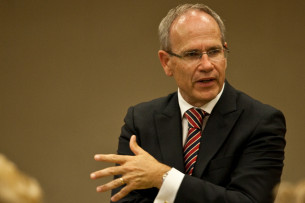 Len Brown formally announced on Sunday that he will again seek the Auckland Super City Mayoralty.

His chances appear good.  His opponents to date include rich American John Pallino, who is not known locally and whose comments are simplistic in the extreme, John Minto whose policy platform will and should invoke intensive discussion, and Uesifili Unasa who may cause some difficulty for Len in the South but probably not much.  Of his opponents one has money but no substance, one has substance but no money and the last is struggling with both.

The right has either shattered or is planning a cunning stealth campaign to hide their right wing nature.  Last time they ran a city wide campaign under the Citizen and Ratepayer banner and more recently changed their name to Community and Residents.  They have been unable to settle on a Mayoral candidate and now former C&R chairs George Wood is standing as an independent on the North Shore and Mark Brickell is standing on a new ticket out west.  Linda Cooper, who is number 75 on National’s list and stood as a C&R candidate in Albany last time, is standing as an independent in the Waitakere ward.  Noeline Raffills has left C&R and will stand as an independent in Whau.  Des Morrison is standing down in Franklin.  He has had a reputation for being a moderate and thoughtful councillor and apparently was somewhat put off by the more extreme behaviour of some of his C&R colleagues.

C&R is therefore down to two councillors, Christine Fletcher and Dick Quax.  Fletcher is apparently in dispute with C&R about who her running mate should be and Quax, how can I say this politely, is someone who makes Jami-Lee Ross appear to be balanced and reasonable.

So the election for Councillors will be interesting.  Beware of a number of right wing wolves dressed in the sheeps’ clothing of independents trying to get your vote.

The event which appears to have stunned the right and vastly helped  Len’s re-election chances is the Government’s commitment to the Inner City Loop.  I understand that various draws dropped when the announcement occurred.  The right at Council level had bitterly fought the proposal but in the end the logic behind the project was far too strong.

Len has his critics amongst the left.  He failed to sort out the MUNZ dispute quickly.  The corporate structure was against him but he could have at least gone and stood on the picket line.  He has been reticent about supporting the living wage campaign even though the cost is minimal, and involves a 0.2% rates increase.  And he has been neutral about the pokies for the Sky City convention centre deal but being neutral is sometimes not good enough.  The whole deal has a stench to it and he should have found a way to express disquiet with what is happening.

He has had some major successes.  He has built a coalition amongst the councillors that has held together for the duration of the term.  The Spatial Plan and draft Unitary Plan are brave future looking proposals.  The Unitary Plan is not without its faults, the herculean job of amalgamating 14 plans and trying to affect the future at the same time will not be without incident.  But the general thrust which is to control urban sprawl and to concentrate development around transport nodes will help Auckland grow in a more sustainable way.

Len’s style is impressive.  He is as much as could be hoped for in the circumstances in control of his agenda, knows what he is talking about and has generally led the city in the most exemplary way.  He is approachable, keen to represent all of Auckland, and is always seeking a consensus.

I am sure some will have a strongly held alternative view but I think that we should vote Len Brown for Mayor.  The city could do far worse.
UPDATE:  I should also include the tireless, staunch, peerless and fearless veteran anti corruption campaigner Penny Bright who is also running for the Mayoralty.  Her website is here.

40 comments on “Len is standing again ”