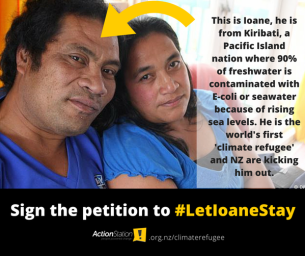 It is inevitable that as the ice caps melt and sea levels rise the Pacific Islands will face the prospect of their homelands disappearing and their fertile land suffering from salination.

Ioane Teitiota is possibly the first climate change refugee who will seek refuge in New Zealand.  He is being forced to return to his home in Kiribati.  I do not know the details but it appears that he may have mucked up his immigration status but he and his wife have jobs, his children are born in New Zealand, the family have integrated into the local community as can be clearly seen by the large West Auckland meeting held last night and their home is slowly dying as fruit becomes hard to get and fresh water supplies dwindle.

Labour MP for Kelston, Carmel Sepuloni, said it was not uncommon in her electorate to have generations of overstayers from Kiribati and Tuvalu.

“Three generations of people here unlawfully, living in fear, two of those generations who’ve never known Tuvalu really…so to constantly have that cloud above them, with fear they could one day be found or made to go back is a horrible climate to be living in,” she said.

Ms Sepuloni said the government needed to step up.

“New Zealand and Australia really need to take responsibility for that…these two countries especially are facing climate change issues that are going to mean they will legitimately be the first climate change refugees, and they’re our neighbours,” she said.

Applications through the Courts to have Mr Teitiota declared a climate change refugee by his lawyer Michael Kidd were declined and he has been ordered to leave.  A last minute plea to associate Minister Craig Foss is Mr Teitiota’s last chance.  Given the Government’s total indifference to Pacific Island concerns at the threat climate change poses I am not surprised.

There is an Action Station petition I would urge you to sign.  Even late signatures will help.

Update:  John Key has pretty well ruled out a reprieve by calling Mr Teitiota an overstayer.  And his comments about the threats posed by climate change are insulting in their simplicity.  He is quoted as saying this:

… “I don’t think that claiming he’s a refugee based on climate change, that that’s a credible argument.”

That may become a valid argument in the future, Key said.

“We can’t rule out what’s going to happen 30, 40, 50 years from now. But some of the scientists are certainly predicting quite a rise in sea levels, and if that’s the case then it will challenge those low lying states and we understand that.”

Can’t rule out? Some scientists? If that’s the case?