Thousands of protesters take to the streets of Auckland today to save local democracy. Key’s response: ‘let them eat oysters’ 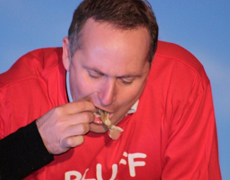 'If I wolf this lot down, I can nick some off that dude's plate too'

Nah, what he said was the hikoi is  “unlikely to make a difference, is premature and the wrong forum to raise concerns”.

One thing you can say about Key – he moves fast. Took Clark four and a half years to stuff up so badly that thousands of people to took to the streets in protest against her policies and before she had the arrogance to simply dismiss them. Key’s taken just six months.

36 comments on “Let them eat oysters ”