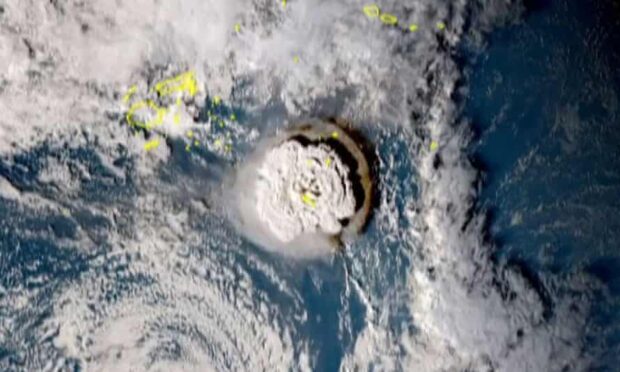 The news over the past couple of days from Tonga has been really disturbing.  A volcanic eruption that was heard through large parts of the world has generated tsunamis that have wrecked considerable damage.  To top things off the Islands have been coated in heavy volcanic ash, making such basic events such as the collection of water almost impossible.

Up to 80,000 people , or four fifths of the population, have been affected.

Communication is slowly being resumed allowing local Tongans to lower anxiety levels by confirming that their Tongan whanau are ok.

The Government has sprung into action and ordered aerial surveillance and two RNZN ships into the area. From the Beehive website:

“Following the successful surveillance and reconnaissance flight of a New Zealand P-3K2 Orion on Monday, imagery and details have been sent to relevant authorities in Tonga, to aid in decisions about what support is most needed,” said Nanaia Mahuta.

“However images show ashfall on the Nuku’alofa airport runway that must be cleared before a C-130 Hercules flight with humanitarian assistance can land,” said Nanaia Mahuta.

“In the meantime two Royal New Zealand Navy ships will depart New Zealand today. Communication issues caused by the eruption have made this disaster response particularly challenging. The delays mean we have taken the decision for both HMNZS Wellington and HMNZS Aotearoa to sail so they can respond quickly if called upon by the Tongan Government,” said Nanaia Mahuta.

“Water is among the highest priorities for Tonga at this stage and HMNZS Aotearoa can carry 250,000 litres, and produce 70,000 litres per day through a desalination plant.

“The survey and diving teams are able to show changes to the seabed in the shipping channels and ports. They will also assess wharf infrastructure to assure the future delivery of aid and support from the sea”.

Fundraising has stepped up.  The Aotearoa Tonga Relief Committee has been formed and is led by Labour MPs Jenny Salesa and ‘Anahila Kanongata’a-Suisuiki.  They have a facebook page here.

Kanongata’a-Suisuiki told The Spinoff that they’re currently waiting for a response from Tonga regarding what items are required, as well as finding avenues to have the containers transported to Tonga. “Our role is to provide opportunities for families here to send goods to their loved ones. We do accept monetary funds as well, in case people don’t want to buy items to donate.”

The Red Cross Society has also stepped up.  Again from the Spinoff:

The non-governmental organisation aims to prevent and alleviate human suffering in Tonga. One of its main focuses is on disaster management and it supports communities throughout Tongatapu, Ha’apai, Vava’u, ‘Eua and Niuas.

Donations will go towards providing access to safe and clean drinking water, as much of Tonga’s drinking water has been contaminated by saltwater inundation caused by tsunami waves and ashfall from the eruption. Shelter is also a concern, particularly for those communities near the coast line.

Donate to the Pacific Tsunami Appeal via Rīpeka Whero Aotearoa.

Tongan generosity as well as their commitment and contribution to Aotearoa New Zealand is legendary.  In 2010 the poor but proud Island Nation raised $705,000 to donate to the Christchurch Earthquake Appeal Fund.  If New Zealanders were to reciprocate their generosity we would donate over $30 million.