David Farrar appears to be throwing his weight in behind National Party’s “New Zealand Sucks” campaign with another misleading post on migration to Australia.

Titled “The exodus grows”, DPF’s take on the most recent stats is that the rate at which people are “fleeing New Zealand” is accelerating.

It’s perhaps disguised as one of David’s curiously obsessive posts on numerical detail but don’t let that fool you – the clue is in the emotive language.

As is increasingly common over at Kiwiblog the post’s singular purpose is to reinforce a perception that National’s doing its best to fuel. Their pollsters have identified “emigration to Australia” as a hot-button issue and advised them not to let reality get in the way of perception. 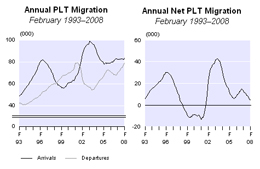 As we’ve reported before, the country’s not emptying out at all – to Australia or anywhere else.

Last year not only did 99.33% of us choose to stay, but total net inflow exceeded outflow – more people are coming here than leaving.

The sky isn’t falling. This is the Nats playing politics. Their deafening silence in terms of a policy solution to the “problem” their pollsters have cooked up is telling.